Economic Management Council so good it should be made permanent

Criticism of Cabinet council is misplaced 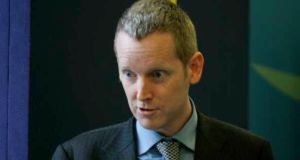 Two of the most influential people on the Economic Management Council are Andrew McDowell (above), chief economic adviser on the Fine Gael side, and Colm O’Riordan, his counterpart for Labour.

The quartet of the most senior members of Cabinet, along with their civil servants and advisers, known as the Economic Management Council, has been subject to much criticism recently. Some claim that it undermines the system of cabinet government and that it gives too much power to advisers and civil servants.

These charges are rubbish. They are made by people with ulterior political motives and/or an incomprehension of the challenges of modern government.

Focus, cohesion and joined-up thinking are essential to govern effectively. They are indispensable at times of crisis management. Brian Cowen’s administration was a chaotic failure partly because it had nothing akin to the EMC which could bring the relevant people together to stay on top of the multiple, cross-cutting and rapidly evolving issues thrown up by the economy’s collapse.

The 1980s Fine Gael-Labour coalition, which also faced huge economic challenges, was a disjointed and incoherent mess. Garret FitzGerald’s infamously shambolic cabinet meetings were a case study in ineffective government. The result, among other things, was that by 1984 Ireland was the only country in the OECD in which central government debt had risen above 100 per cent of GDP.

Consider the history of cabinet government. The British invented it centuries ago when states did very little and a few individuals could sit around a table and come to collective decisions on a narrow range of relatively straightforward issues. Today, states are sprawling behemoths. Massive bureaucracies with enormous budgets carry out a bewildering array of complex functions.

The British decades ago recognised that classic, pure-form cabinet government does not work in the modern context. Cabinet subcommittees, such as the EMC, have long fed into broader cabinet discussions in Whitehall. There is no little irony that we have remained more British than the British themselves in keeping with the made-in-London model for so long.

Is there more to the criticism that the EMC gives too much power to unelected advisers and civil servants?

One of the reasons Ireland’s executive branch of government has historically performed poorly is because few ministers master their briefs. That, in turn, is partly because, as full-time parliamentarians and constituency workers, they have limited time to devote to ministerial work.

Competent core team
All good managers know that without a competent core team and effective delegation nothing can be achieved. In government, without reform-minded bureaucrats and capable advisers, failure is guaranteed.

While there are still too many do-little senior civil servants in the system and some ministers have given jobs to advisers more because of party affiliation than their relevant expertise, the advisers on the EMC are unusually good (here’s another irony: the policy adviser of the most vocal critic of the EMC within the Government – Joan Burton – is very clever and able, but he has no career background in welfare issues and a long history of Labour Party involvement). Fortunately, both Taoiseach and Tánaiste chose their economic advisers primarily on the basis of merit. Two of the most influential people on the EMC are Andrew McDowell, chief economic adviser on the Fine Gael side, and Colm O’Riordan, his counterpart for Labour.

Although neither makes the case for efficiency gains strongly enough to his respective political master (if economists don’t make that case, who will?), McDowell and O’Riordan have made the coalition more effective because of their considerable abilities, on the EMC and beyond.

I was McDowell’s editor at the Economist Intelligence Unit for a period. Of the many dozens of economists and analysts from numerous countries whom I edited and recruited while in that role, none was more capable than McDowell. He is world class.

O’Riordan, with a doctorate in economics from one of the world’s leading universities, would not be out of place on the staff of any chancellery or finance ministry anywhere.

What of the civil servants? Martin Frazer and Geraldine Byrne-Nason from the Department of the Taoiseach sit on the EMC. They are classic civil servants, providing briefings and insights. It is hard to find anyone who questions their ability.

John Moran and Robert Watt, secretaries general of the Departments of the Finance and Public Expenditure and Reform respectively, are less typical civil servants and more active protagonists in EMC discussions. Although they have deficiencies, both have broad experience and are strongly reform-minded.

The current administration deserves ample criticism for the plodding and foot dragging the troika members regularly highlight, but without the EMC, matters would be considerably worse. It is among the Coalition’s best institutional innovations and one that should be made permanent.