Ireland the main beneficiary of US foreign direct investment

Study shows US firms have invested over $277bn here since 1990 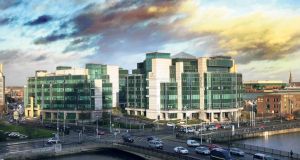 Ireland is the number one destination in the world for US foreign direct investment (FDI), according to a new report.

The study, which was commissioned by the American Chamber of Commerce Ireland, reveals that US firms have invested more than $277 billion here since 1990. In addition, the 700 US companies based in Ireland now employ 130,000 people.

According to the report, the output from US companies resident in Ireland now exceeds $80 billion a year and exports from such firms are four times higher than from China.

Direct investment stock in Ireland in 2013 reached a record $240 billion, a greater investment stake than Germany and France combined.

The study finds Ireland’s overall investment position in the US totalled a record $26.2 billion in 2013, a stake larger than many other nations like Italy, Denmark and Finland.

Launching the report, Minister for Foreign Affairs and Trade Charlie Flanagan said the study demonstrated the strength of the economic relationship between the two countries.

“The report also indicates a bright future ahead with many US companies planning to grow their operations here; this is welcome news at a time where the latest figures show unemployment down for the 39th consecutive month in a row,” he said.

1 We are ‘sale agreed’, but can we go back with a lower offer?
2 Working from home: New costs, new stresses and little relief
3 Eason to lay off 150 staff as it prepares for June reopening
4 ESB shelves plan for €500m electricity generator at Poolbeg
5 Joint accounts: if one of us dies, can the other access the money?
6 HSBC board rethinks overhaul and seeks even deeper cuts
7 Ryanair almost certain to oppose German government’s bailout of Lufthansa
8 ‘Over 1,000’ pubs have interest in Covid-19 insurance test case
9 ‘I’ve so many outgoings with family life . . . it puts manners on you’
10 Restaurants and gastropubs hope to avoid a dry reopening
Real news has value SUBSCRIBE