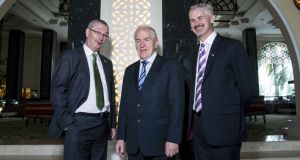 Ireland’s business community in Asia gathered in the Malaysian capital Kuala Lumpur for the eighth Asia Pacific Irish Business Forum, an event each year just before the region’s GAA players take to the pitch in boiling heat to compete in the Asian Gaelic Games.

“It’s the biggest gathering of networked Irish people in the region,” said ESB International’s regional chief, Paraic McGrath, who has been a driving force in bringing the forum together for many years.

“This year we had the Department of Foreign Affairs as a major sponsor along with Invest Northern Ireland and that did a lot to support the event.”

A networking dinner the night before the event attracted 150 people, while 190 attended the forum itself.

The GAA has a major network in Asia, with some very senior figures taking part, and it is always intriguing to witness groups of Irish men and women who would not ordinarily play Gaelic taking part in the national sport with such gusto.

Among the companies putting up teams were Fexco, First Derivatives, ESB International, Kerry Group, Zenith Technologies and PM Group, while Malaysia was represented by Kentz, Brighton School of Languages and MFE Formwork, and other international companies included Myanmar Tower and Coca Cola.

Burma (Myanmar) was a big feature this year. Since the government started to open up this country of 55 million people, Western companies, including Irish ones, have been keen to get in to this new market.

Earlier this year, PM Group won a major contract with the Asian Development Bank (ADB) in Burma to prepare a development project to improve the urban environment and public health in the city of Mandalay.

The company has also just been shortlisted for a new ADB urban improvement project in Myanmar, which will help create competitive economic nodes along transport corridors to enhance regional trade, industrial and commercial activities. Included in the project are the cities of Mawlamyine in Mon State, and Hpa-An and Myawaddy in Kayin State.

“Myanmar is at the crossroads between Asean (Association of Southeast Asian Nations) and India and China. Going forward, Myanmar is the nexus. The fact the country has been closed for the past 25, 27 or 50 years, depending on how you read it, there is a unique opportunity,” said O’Regan.

The DFA and Invest Northern Ireland clearly see the forum as a prime event for business in the region, he said.

“All the ambassadors were there, and this gives a real message back to the government about what’s required in the region,” said O’Regan.

There was a still a strong focus in Ireland on the US and Europe but there was a need for greater bandwidth in coming years to include the opportunities that Asia has to offer. “There is a sense that there is a strategy for Asia and that point was made throughout the day. We need a strategy that joins the dots, involving government and business and organisations like the GAA which has a massive network in Asia, to serve Irish business and increase employment opportunities throughout the region,” he said.