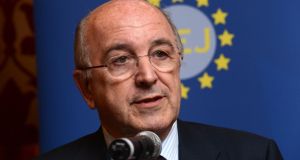 
Officials from IDA Ireland and the Department of Enterprise are engaged in a last-ditch lobbying campaign against a proposal by the European Commission to maintain a public register of state jobs grants to big employers.

Joaquín Almunia, the EU competition commissioner, has proposed the register as part of new European rules, called regional aid guidelines, covering the payment of such grants.

Some of the IDA’s big multinational clients, who can receive grants from the State of up to €10,000 per job created, have asked authorities here to try to block the move.

They argue that the register will put European countries at a disadvantage when it comes to seeking foreign direct investment in competition with countries from outside the continent. The employers fear a public register of the payments paid to big multinationals would give competitor countries sensitive information.

Irish authorities have told the commission the register will help competitor countries set their own grants at more attractive rates to woo investment, because European countries will in effect have to “show their hand”.

Ireland is being backed by officials from Germany, France and the UK in opposing the register.


Compromise
Irish officials told The Irish Times in recent days that they expect some form of compromise to be agreed before the introduction of the regional aid guidelines at the beginning of July. The rules would regulate the job grants that can be paid to big employers by European countries until 2020.

As part of the process, each country has to submit to the commission a “regional aid map”, showing the parts of the state where capital and employment grants can legally be paid. The rules are set according to unemployment levels and the value of the economy in each area.

Under existing regional aid guidelines, these types of grants can be paid in Ireland only in areas outside Dublin and Cork. Under the proposed new guidelines, much of regional Ireland – covering just under 52 per cent of the population – will remain eligible.

Mr Almunia originally wanted to ban all such grants to big employers in Europe, on the basis that it was in effect giving multinationals “free state money” for investments that might be made even if no grants were available. The commission caved in on this proposal last year after an intensive Irish-led campaign of opposition by a group of nations informally labelled “the coalition of the unwilling”.


Aid map
The Department of Jobs, Enterprise and Innovation says it is preparing to submit Ireland’s new regional aid map, which must be agreed with Europe before the end of June. A spokesman for the department said Ireland’s map would be submitted to the commission “shortly”.

Under current proposals, Kerry and parts of the east of the State would be excluded from receiving grants, alongside Dublin and Cork.

Irish authorities are arguing with Brussels that Kerry and one town in each of the counties Wicklow (Arklow), Meath (Kells) and Kildare (Athy) should be eligible for grants, because of they have been hard-hit by the economic collapse.

Ireland is arguing that Kerry, for example, falls into the greater Shannon region that was badly affected by the closure of Dell’s plant in Limerick during the recession.

If the Irish lobbying campaign succeeds, employment and capital grants will still be payable in every county in the State, with the exception of Dublin and Cork.

‘High priority’
“Having a strong investment proposition will be vital to ensure that Ireland can maintain the record levels of foreign investment that are currently flowing into the country,” said the IDA. “Attracting businesses into areas outside of Dublin and Cork remains a high priority for IDA Ireland. This new grant regime will allow us to continue to incentivise these areas.”