Ireland among Lagarde backers for second term as IMF chief 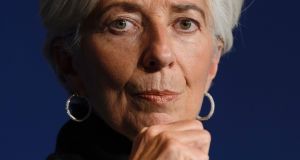 Christine Lagarde has picked up support from European countries including Ireland and a one-time rival for a second term as leader of the International Monetary Fund.

Germany, France, the UK and Spain have also came out on Thursday in support of Ms Lagarde, whose current term ends on July 5th. Member nations intend to complete the selection process by early March.

Ms Lagarde said China was also backing her for a second term. Mexico’s central bank chief Agustin Carstens, who lost the contest with Ms Lagarde to become IMF managing director in 2011, said he is not running for the post now and she deserves a chance to finish her work.

The support reinforces expectations that Ms Lagarde (60) is all but a lock to be reappointed, though legal charges related to actions taken when she was French finance minister remain a potential risk.

He also noted that she had shown a “good and helpful understanding” of Ireland’s position as well as an appreciation for the hard work of the Irish Government and the Irish people in overcoming the economic challenges and bailout.

Individuals can be nominated by a fund governor or executive director through February 10th, the Washington-based institution said, and Aleksei Mozhin, dean of the fund’s executive board, said the board aims to reach a decision by consensus.

“She both should and I think will get a second term,” Adam Posen, president of the Peterson Institute for International Economics, said at the World Economic Forum in Davos, Switzerland.

“I’m also a big fan of the Lagarde IMF. The team she’s put together - they’re all truth-tellers and they’ve tried to turn the boat around.”

At the fund’s annual meeting in Lima in October, Ms Lagarde said she would be open to serving another term. While she’s still the front-runner and analysts said the case is unlikely to derail her reappointment, the prospect of a politically charged trial in her home country may still complicate her future at the IMF.

Ms Lagarde has repeatedly pleaded her innocence in the case. UK chancellor George Osborne said in a Twitter posting that he was “delighted” to nominate Ms Lagarde for a new term, describing her as “an outstanding leader with vision and acumen” to steer the global economy in the coming years. Germany’s finance ministry said in a statement that Ms Lagarde had shown herself to be “a prudent and successful crisis manager in difficult times.”

Ms Lagarde told Bloomberg Television that she was “extremely pleased” to receive the support. Speaking in Davos, Finnish finance minister Alexander Stubb said that Lagarde “definitely” has his country’s support for a second term. “ Lagarde is an amazing professional and a true champion of financial issues,” he said in a Bloomberg TV interview.

1 Boris Johnson's new immigration regime will damage much more than industry
2 Bank leaked my loan request to family who tried to rip me off
3 Mastercard to create 1,200 new jobs by expanding base in Dublin
4 Varadkar resigns amid warning impasse will hit the economy
5 Garda mobile contract win causes concern over Eir’s use of Huawei kit
6 Google completes purchase of Treasury Building for €120m
7 Billionaire Zara founder and German funds vie for prime Dublin offices
8 AIB lines up former HSBC executive McDonagh as chairman
9 Brendan O’Connor is back in the RTÉ big league
10 When I’m 65: five ways you’ll benefit
Real news has value SUBSCRIBE