The more restrictions and the longer they last, the bigger the economic hit 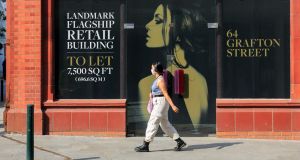 Cliff Taylor: We appear to be on some kind of strange economic plateau. Photograph: Gareth Chaney/Collins

First we thought we were shutting the economy down for a few weeks. Then it quickly became clear that we were in a longer-running battle. Now we have seen a significant lift in activity as the worst of the early restrictions were lifted, but the outlook is clouded again by the fear that parts of the economy will open and close for a prolonged period as the virus ebbs and flows.

We appear to be on some kind of strange economic plateau. Activity has risen from the valley of the initial shutdown but it is not clear what further progress we can make in climbing back to the previous level of activity. The latest restrictions in Dublin and Donegal, and talk of more to come, now pose another threat, with business sources reporting a definite pulling back in business plans across the economy  to “wait and see” what happens.

1 Schools instructed to stop using Virapro branded hand sanitiser
2 Nine charged following clashes between gardaí, anti-lockdown protesters
3 Two hundred Irish retailers for all your online Christmas shopping
4 Father unaware partner and baby dead until gardaí called to raise alarm
5 My Irish passport has calmed tempers at borders and airports
6 Young people ‘sick of being told what not to do’, says WHO’s Mike Ryan
7 Dublin residents seek removal of ‘distasteful’ cycle bollards
8 HSE says it has stabilised staffing situation in nursing home hit by Covid-19 outbreak
9 US election: Democrats target a major Senate upset in South Carolina
10 Garda checkpoints turn motorists back, traffic volumes drop
11 No doctor, no pharmacy, no supermarket: I’m moving to an island
12 John Gilligan arrested along with two others in southern Spain
13 Large crowds gather on Dublin’s Grafton Street on eve of lockdown
14 Six further outbreaks of Covid-19 in nursing homes and community hospitals, Nphet says
15 Borat 2: Rudy Giuliani’s trouser-reaching scene is the work of a daring young woman
16 Nphet now in control of the country’s economic and social policy
17 Poots’ comments about Covid-19 would be funny if they were not so serious
18 Life under Level 5: Where can I go, who can I see, what is closed and what is open?
19 How long can Government afford to keep State pension age at 66?
20 Dáil approves transfer of mother-and-baby home records to Tusla
21 Shock at golf clubs as sport faces shutdown in Level 5
22 Waterford woman accused of sharing pictures of boys who murdered Ana Kriégel
23 Rising Time’s Shay Byrne is so glum he makes Morning Ireland seem cheerful
24 Liam Neeson among new investors backing €100m Ireland Impact fund
25 Reasons to believe Covid-19 pandemic will ease next spring, says health expert
26 'You can’t see the waves coming' - crew describes dramatic rescue of ship off Irish coast
27 Guinness brings out a non-alcoholic version of the black stuff
28 Galway nursing home sees 26 out of 28 residents test positive for Covid-19
29 International Dublin Literary Award: Anna Burns becomes first Irish woman to win €100,000 prize
30 ‘You guys are amazing’: Matt Damon’s message of support to Temple Street children, families and staff
31 Gym owner who planned to stay open changes mind after gardaí visit
32 Diarmaid Ferriter: We have been infantilised by Government’s latest move
33 Warning that small shuttered shops may reopen in campaign of disobedience
34 Lockdown meals: 50 great Irish restaurant food boxes to go
35 UCD professor asked to resign from EU committee over Covid-19 claims
36 Thousands of gardaí mount checkpoints and patrol parks, beauty spots
37 Developer’s impeccably restored Fitzwilliam Square Georgian for €3.5m
38 Body of woman and baby boy found in separate locations near Lucan
39 Bus drivers faced ‘mayhem’ as passengers tried to travel, says union
40 How on earth do we the calculate the cost of Level 5 for the Irish economy?
Real news has value SUBSCRIBE