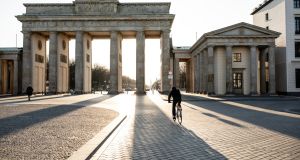 The IHS Markit flash euro zone purchasing managers’ index for services fell to 47.6 in September, from 50.5 in the previous month, data published on Wednesday showed.

It was the first time in three months that the reading had dropped below the 50 mark, and the lowest level since May. Economists polled by Reuters had expected the level would remain unchanged month-on-month.

A reading of below 50 indicates that the majority of businesses reported a contraction in activity compared with the previous month. But the sentiment surveys are not a measure of the extent to which economic activity has recovered relative to the pre-virus level and, while they signal how broad-based the recovery is, they cannot measure its pace.

By contrast, manufacturing activity continued to improve. The euro zone manufacturing PMI rose to 53.7 in September, the highest in two years and up from 51.7 the previous month.

However, services are the euro zone’s dominant sector and the bloc’s composite index – an average of the two sectors – dropped to 50.1 in September, from 51.9 in the previous month.

Factories reported a boost to production from rising exports and the reopening of retailers in many countries, but “the larger service sector has sunk back into decline as face-to-face consumer businesses in particular have been hit by intensifying virus concerns”, he added.

“Today’s data suggest that the recovery is grinding to a halt, at least outside the German manufacturing sector,” said Jessica Hinds, economist at Capital Economics. “With no sign that the resurgence in virus cases has been stamped out, there is a clear and growing risk that it goes into reverse, at least in the countries worst affected by the virus.”

Economists warned that the growing signs that the fragile economic rebound was running out of steam meant the bloc risked a double-dip recession.

German consumer confidence increased by less than expected in recent weeks, according to a separate monthly survey published on Wednesday by research organisation GfK. Rising infections and worries about job losses were weighing on sentiment, it reported. The airline Lufthansa and car parts maker Continental have warned in recent weeks that they plan to cut thousands of jobs.

“The recovery is under more pressure than previously thought,” said Bert Colijn, economist at ING. “For governments and ECB, this will be a wake-up call, if they needed one.”

ECB policymakers have recently expressed diverging views about the seriousness of the slowdown. – Copyright The Financial Times Limited 2020