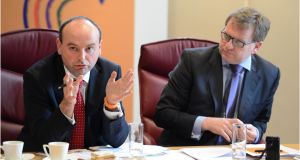 Employers’ group Ibec is calling for a major overhaul of the State’s National Development Plan (NDP) and an additional €70 billion in spending on key infrastructural projects.

Ibec also called for the acceleration of key projects such as the Dart expansion plan and the Metro North transport projects in Dublin, where transport congestion is particularly bad.

In a submission to the midterm review of the plan, Ibec said the Government must seize the “unprecedented wealth-generating capacity” of the Irish economy to “deliver an ambitious programme of world-class public services and infrastructure development”.

The NDP was due to run from 2018 to 2027 with €116 billion pledged for transport, water treatment, energy and other projects needed for the future. It also doubles as the Government’s blueprint for shifting to a zero-carbon economy.

As part of the review, the Government plans to extend the timeline to 2030 as well as enhance the budget.

Minister for Public Expenditure Michael McGrath has already warned that existing budgets may not cover the final cost of big infrastructure projects such as MetroLink, BusConnects and the M20 Limerick-Cork motorway.

In its submission Ibec said chronic underinvestment in key infrastructure was threatening to undermine the prospects for economic recovery. It said the NDP budget should increase by about €70 billion to maintain an investment target of 4 per cent of national income, a metric adopted in other countries.

Ibec wants the Government to seize greater opportunities for non-exchequer financing to leverage investment at a time of historically low interest rates.

Covid has led to an increase in the financing options for investment projects, including greater EU funding, expanded European Investment Bank lending capacity and greater interest from private finance to fund long-term infrastructure projects, it said.

“The NDP should set out an ambitious long-term pipeline of public-private partnership (PPP) projects which would develop a stronger interest amongst international project financiers in Irish market opportunities,” the group said.

In its review the employers’ group noted that the twin crises of Brexit and Covid had placed greater emphasis on the shared-island agenda. It called for the budget for the Shared Island Fund to be increased to €5 billion.

“While the plan for economic recovery must address multiple evolving aspects of both the Covid and Brexit crises, the experience of the past year has shown that Ireland now has unprecedented wealth-generating capacity to ambitiously resource this plan,” Ibec director of policy and public affairs Fergal O’Brien said.

“A substantially enhanced and more ambitious NDP must therefore be central to the recovery strategy,” he said.

“The next 10 years will see a transformation in the country. By 2030 there will be 1.1 million additional people on the island. We have also set ambitious targets to decarbonise society and the economy, implement the National Planning Framework to rebalance regional growth, and encourage major changes in how people live and work, over the coming years,” he said.

“Whilst the short-term focus may be on the challenges and changes brought about by Covid-19 and Brexit, we must plan for these less dramatic but equally important long-term challenges which litter our country’s path,” he said.

“ We will not maximise the benefits of these significant changes without careful planning and significant investment.”