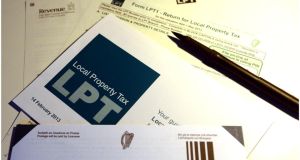 Homeowners have until March 31st to get their property tax affairs in order. Photograph: Bryan O’Brien / The Irish Times

Homeowners who have yet to pay their local property tax (LPT) or household charge have until March 31st to make the payment and avoid any interest or penalties.

After this date the Revenue Commissioners will launch a nationwide compliance programme and will charge interest at a rate of 0.0219 per cent per day )or 8 per cent a year) from the date the tax was due - July 1st 2013 in respect of 2013 LPT and the household charge; and January 2014 1st in respect of 2014 LPT. If you have knowingly undervalued your property, you may also be liable to interest on the additional tax owed. Over 1,400 people have already self-corrected their valuation since November.

According to the Revenue, the compliance rate for 2014 currently stands at about 82 per cent, generating €110 million so far. About 40,000 items of correspondence from late last year have yet to be processed, and the compliance rate will also increase as the various phased payments are processed. Those opting to pay by the single debit authority for example, will only pay the tax on March 21st.

“Unpaid LPT and interest will be a charge on a property and will cause difficulties for any transfer of ownership on sale, inheritance, etc.” the Revenue warned.

With regards to last year’s tax, which applied on a half-year basis, a compliance rate of about 93 per cent was reported, generating a total of €242 million for the government. To address those who didn’t pay, the Revenue sent out 190,000 reminder letters; initiated over 29,000 mandatory deductions from wages/pensions; refused about 3,500 tax clearances; and applied an income tax surcharge in over 6,700 cases.

If you have not yet paid your LPT, you can contact Revenue at 1890 200 255 to arrange to do so. If you undervalued your property, you can self-correct this valuation and pay the additional liability by March 31st by using its online service.

“Failure to self-correct an understated valuation will lead to difficulties in the context of property sales,” the Revenue said.

1 PTSB plays down Ulster Bank talk as it sells €1.4bn of loans
2 Housing crisis will be permanent unless there is radical rethink, industry warns
3 Am I crazy to consider switching to an Ulster Bank mortgage?
4 Up or down – how much is your Local Property Tax this year?
5 Irish tech company Asavie acquired by Nasdaq-listed Akamai
6 Ghost newspapers and zombie brands are stalking the media
7 Disposable income in Ireland rose 28% between 2012 and 2019
8 How much state pension will I get next year?
9 Brexit to curb services trade with UK, accountants group warns
10 CRH sells Brazilian cement business for $218m
Real news has value SUBSCRIBE