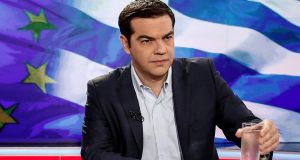 Alexis Tsipras: blamed the European Central Bank for caving in to political pressure to halt the vital funding that the banks needed. Photograph: Yorgos Karahalis/ Bloomberg

Describing Sunday’s referendum as coming five years too late, Greek prime minister Alexis Tsipras has said that voters are fully aware that voting No “means demanding a solution that’s realistic”. But he insisted that this could not be equated with calling for a rift with Europe.

“We’re staying in Europe,” said Mr Tsipras, appropriating the slogan used at Yes rallies in recent weeks, “but we want to prosper in Europe. We want to be equals in Europe”, he said, in a live interview with private TV channel Antenna.

Claiming that “the negotiations are continuing and would continue on Monday”, Mr Tsipras also predicted he could secure a new aid deal with creditors within 48 hours of winning the referendum.

Admitting that the scenes of pensioners having to wait hours to access their money at banks were an embarrassment, he blamed the European Central Bank for caving in to political pressure to halt the vital funding that the banks needed.

While finance minister Yanis Varoufakis expressed his confidence that the banks would reopen for business on Tuesday, as envisaged in the government order that imposed capital controls last Sunday night, the head of the Union of Hellenic Chambers of Commerce said this was impossible due to low liquidity.

“We are reliably informed that the cash reserves of the banks are down to €500 million. Anybody who thinks they are going to open again on Tuesday is day-dreaming. The cash would not last an hour,” Constantine Michalos was quoted as saying.

The bank closures and the ATM withdrawal limit of €60 are taking a huge toll on the marketplace, with commercial organisations in Athens and Piraeus reporting a slump in sales, with the exception of the food sector.

With just three days ahead of the vote, cracks appeared within Mr Tsipras’s junior coalition partner Independent Greeks, three of whose 13 MPs expressed doubts about the wisdom of holding the referendum, eliciting a furious response from Panos Kammenos.

“We are at war and whoever cannot contribute should leave the fight,” said Mr Kammenos, who holds the post of defence minister.

One of the dissenting MPs subsequently resigned his seat, but was immediately replaced by the party.

According to Greek media reports, Mr Kammenos also reacted angrily to proposals to increase defence cuts that Mr Tsipras had included in his request for a new, two-year bailout deal with lenders, which they subsequently rejected.

Campaigning in the week-long referendum is expected to conclude this evening with the No camp holding a concert on Syntagma square and Yes supporters rallying at the historic Kallimarmaro stadium, location of the first modern Olympics.