Greece’s Syriza heading for possible split ahead of bailout vote 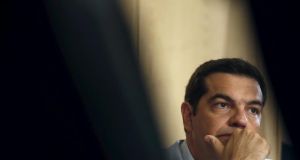 Greek Prime Minister Alexis Tsipras’s Syriza party looked set to split after the leader of its far-left faction called for a new movement to fight a bailout deal that MPs will vote on later on Thursday.

Days after striking an agreement with foreign creditors, Mr Tsipras is asking parliament to approve a bailout agreement that pledges tax hikes and spending cuts in exchange for €85 billion in fresh loans. It will be Greece’s third financial rescue programme agreed with creditors in five years.

The vote, expected in the early hours of Friday, will test the strength of a rebellion by anti-austerity Syriza MPs, which could raise pressure on Mr Tsipras to call snap elections as early as September.

The rebels’ leader, former energy minister Panagiotis Lafazanis, took a step towards breaking away from Syriza, a coalition of leftist groups which stormed to power in January promising to reverse austerity policies demanded by the euro zone and International Monetary Fund creditors.

“The fight against the new bailout starts today, by mobilising people in every corner of the country,” said a statement signed by Mr Lafazanis and 11 other Syriza members posted on the far-left faction’s Iskra website.

The statement called for founding a “united movement that will justify people’s desire for democracy and social justice” although it did not explicitly call for a new party or a split from Syriza. The government responded by saying the move “finalises his decision to choose a different path from that of the government and Syriza.”

The rebels insist the government should stand by the promises on which it was elected to reverse the waves of spending cuts and tax rises, which have had a devastating effect on an already weak economy over the past few years.

Parliament, however, is expected to approve the bailout agreement by a comfortable margin since opposition parties have promised their backing for the government to ensure Greece does not return to financial chaos. Once the bill is passed, euro zone finance ministers will vet the deal in Brussels on Friday, paving the way for disbursement of aid before a €3.2 billion debt payment to the European Central Bank falls due next week.

Mr Tsipras has faced a rebellion among about a quarter of his 149 MPS since agreeing last month to the bailout deal under the threat of a banking collapse and euro zone exit.

He is expected to tighten his grip over most of Syriza when the party holds a special congress to debate its differences, after which Mr Tsipras is widely expected to call early elections to seal popular support for implementing the bailout deal.

He has long argued Greece cannot repay all its huge debts and demanded a partial write-off. However, the creditors - the European Commission, European Central Bank and IMF - have agreed to consider the issue only after a review in October of the government’s implementation of its side of the deal.

An analysis seen by Reuters on Thursday said the creditor institutions had “serious concerns” about the sustainability of Greek public debt.

However, the creditors’ analysis said sustainability could be achieved without the need for any write-off by extending grace periods before Athens has to start paying interest and principal on its bailout loans.

The IMF favours some sort of debt “haircut” but the government in Germany, where public opinion is hostile to any help for Greece, implacably opposes such relief. Berlin is more open to extensions of debt, however.

Greek finance minister Euclid Tsakalotos said the creditors would review Greece’s budget performance every three months - the kind of foreign supervision that angers Greeks across the political spectrum. However, he called on MPs to back the deal to ensure that other euro zone countries sceptical about pouring yet more billions into Greece do not veto it.

The parliament in Germany, the country which contributes most to the bailouts, must also give its approval.

Months of bitter negotiations between Athens and the creditors have shaken an economy which last year had been pulling out of a long depression before turning down again.

But data on Thursday showed the economy returned to growth in the second quarter of this year. Confounding economists’ expectations of a deepening recession, the ELSTAT statistics service said gross domestic product rose 0.8 per cent quarter-on-quarter in April-June.

Nevertheless, the economy is likely to have worsened since then as the government imposed capital controls on June 29th to save the Greek banking system from collapse.

The bailout deal is based on forecasts that the economy will shrink between 2.1 and 2.3 per cent this year. Nikos Magginas, an economist at National Bank, said the surprise data offered hope that the fall in GDP could be less than 2 per cent in 2015.

1 Admission of mistake in Oxford vaccine dose raises doubts over reliability
2 Cliff Taylor: Deal or no deal we are now heading for a hard Brexit
3 Irish Life fund pays €49m for 94 Dalkey apartments
4 Karlin Lillington: How I managed to cut my mobile phone bill by at least half
5 Central Bank rules out changes to mortgage rules during pandemic
6 Fiona Reddan: Who’s afraid of Revolut? Not AIB and BOI it seems
7 Smarter ways to heat your home: Eight of the best modern systems
8 Lahinch Golf Club runs out of its own cash after €3m Covid-19 hit
9 State may face €1bn in compensation in Covid-19 case, Press Up claims
10 Pandemic supports will be removed once effective vaccine is rolled out, Government warns
Real news has value SUBSCRIBE