Neither breakthrough nor breakdown reported as Greek debt talks rumble on 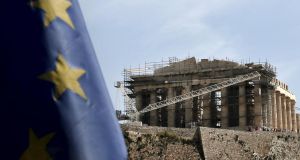 Greece made a small interest payment to the International Monetary Fund on Wednesday but European lenders dashed hopes for a cash-for-reforms deal before a more crucial, bigger instalment Athens must pay next week.

Prime minister Alexis Tsipras’ government sought to shift blame on Tuesday onto the euro zone and IMF for a lack of agreement in the three-month-old negotiations, charging that each was setting different “red lines” on multiple issues from pension and labour reforms to the primary budget surplus.

But EU officials accuse Greece of failing to produce enough concessions ahead of Monday’s Eurogroup meeting of euro zone finance ministers and the group’s chief, Jeroen Dijsselbloem, said an agreement then is no longer possible.

“Since the last Eurogroup quite a bit of progress has been made,” he said in Paris. “I’m getting some positive reports from the talks in Brussels. Still, lots of issues have to be solved, have to been deepened more, with more details, so there will be no agreements on Monday. We have to be realistic.”

While “Greece needs help,” the aid has to “make sense,” Mr Schaeuble said at a meeting with students in Berlin. “If Greece suffers damage, Germany suffers damage too.’’

Athens is hoping the Eurogroup register significant progress in the talks, possibly enabling the European Central Bank to let Greek banks buy more short-term government debt. The ECB’s governing council was expected to extend emergency liquidity assistance to the Greek banks when it conducts its weekly review later on Wednesday, but any further move depends on progress in the reform talks, central bank sources said.

Thomas Wieser, head of the Eurogroup Working Group which prepares decisions for the ministers, told CNBC late on Tuesday that as things stood there was no prospect of a deal by Monday.

“Colleagues in Brussels have been battling with fiscal issues, VAT issues, labour market reforms and I think it is fair to say that the judgement of everybody, including the Greek colleagues, is that we will not be there yet on Monday,” Mr Wieser said.

Deputy finance minister Dimitris Mardas said Athens had sent €200 million to the IMF on Wednesday but declined to comment on next week’s €750 million payment to the IMF. With some municipalities, regional and public entities resisting an order to turn over cash reserves to the central bank, the government is struggling to scrape together enough money to meet the IMF payment and pay wages and pensions later in the month, according to people familiar with the cash-raising effort.

A government source said the money raised so far by the decree has fallen short of a target of €2.5 billion and that Athens is expected to continue resorting to other one-off measures such as holding off some payments to suppliers.

Little detail has emerged from the “Brussels group” talks between Greece and the IMF, European Commission and ECB. However, Tuesday’s angry statement by a Greek government official suggested the sides are still far apart. “There has neither been big progress nor a stalemate,” a source at the negotiating table said.

“The Brussels group’s work was not affected by the statement from Athens. Some gaps are narrowing but it should go faster if something substantial is to be presented on May 11th.”

Mr Tsipras has made some concessions on restarting stalled privatisations, harmonising value added tax and improving tax collection, but has refused to budge so far on pension cuts and labour law reform to ease private sector layoffs.

The lenders also oppose his plans to raise the minimum wage. Asked when a deal might be possible, the source said: “It depends on when Tsipras decides to tell his own people that he has to cross at least some of the red lines.”

Deputy prime minister Yannis Dragasakis met ECB president Mario Draghi late on Tuesday to plead for Greek banks to be granted more emergency liquidity and allowed to buy more short-term treasury bills, easing the government’s cash crunch. “We stressed that the prospect of a deal is realistic provided all sides contribute creatively in order to achieve it, and work together to tackle the problem of liquidity,” Mr Dragasakis said in a Twitter message after the talks.

Greece sold €1.138 billion of six-month T-bills on Wednesday, covering the entire amount it sought to raise in the first of two auctions this month. Despite an increasingly dire financial position as bailout aid remains frozen, Athens has been able to find domestic buyers to plug any gaps resulting from foreign investors’ reluctance to roll over their own Greek T-bill holdings.

However, the ECB has capped the amount that Greek banks can buy because of concerns that their use of central bank funds amounts to indirect monetary financing of the government.

1 Irish tech company Asavie acquired by Nasdaq-listed Akamai
2 PTSB plays down Ulster Bank talk as it sells €1.4bn of loans
3 Am I crazy to consider switching to an Ulster Bank mortgage?
4 Up or down – how much is your Local Property Tax this year?
5 How much state pension will I get next year?
6 First Derivatives expects Covid-19 to accelerate growth
7 How long can Government afford to keep State pension age at 66?
8 Brexit to curb services trade with UK, accountants group warns
9 Tesco takes to the skies with home delivery by drone
10 CRH sells Brazilian cement business for $218m
Real news has value SUBSCRIBE