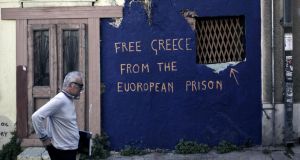 Greece may bring more to the table in negotiations for a debt deal with its creditors, a close aide to the prime minister said on Saturday, as time runs out for the austerity-battered country to avoid default and help its ailing banks.

Back from a visit to Russia, Prime Minister Alexis Tsipras will meet his negotiating team in Athens and may speak to European Commission chief Jean-Claude Juncker by phone to try to break the deadlock before an emergency summit on Monday.

His government urgently needs to secure a cash-for-reforms deal to avoid defaulting on a €1.6 billion IMF loan at the end of June that could eventually turf it out of the euro zone. With nervy depositors pulling billions out of Greek banks, Athens may have to impose capital controls within days to staunch the flow.

On Friday, the European Central Bank sanctioned further support for the banking system amid fears for its stability. The move was agreed at an emergency meeting to raise the cap on funding for the Greek banking sector.

Speaking in advance of the crisis summit in Brussels on Monday, Yanis Varoufakis, writing in today’s Irish Times, called for Ireland to support Greece’s position.

“The pressing question our Irish friends must answer prior to Monday’s extraordinary summit meeting on Greece is this: is it more likely that the euro zone will become a better union to belong to if Greece is thrown to the wolves, despite the type of proposals tabled at Thursday’s eurogroup meeting?” he asks.

“Or is a deal revolving around these proposals more likely to lead to greater openness, efficiency and democracy?”

It was not immediately clear how far Greece’s leftist government, which won a January election vowing to lift its people out of austerity, is willing to bend in order to secure an agreement or what kind of additional offers it could make.

While Greece has dug in its heels over demands for pension cuts and some tax rises, its leaders have continued to sound upbeat about the chances of reaching a deal - optimism that is not widely shared among Europe’s leaders.

“We will try to supplement our proposal so that we get closer to a solution,” State Minister Alekos Flabouraris told Greek Mega television in a morning news show.

“We are not going there with the old proposal. Some work is being done to see where we can converge, so that we achieve a mutually beneficial solution.”

Greece has repeatedly warned Europe about the dangers of cutting the country adrift from a bailout programme. In that vein, Mr Flabouraris said he was confident the ECB would not stop funding Greek lenders as this would set off a domino effect and topple lenders in other vulnerable parts of Europe.

EU chief Juncker has been seen as more sympathetic to Greece’s position, although he has reportedly warned Athens not to rely on him to avert a collapse in the debt talks.

“With deposits fleeing the Greek banking system as a result of his brinkmanship, and the European Central Bank Governing Council ready to scale back its emergency lending authority (ELA) for Greek banks,Tsipras faces the choice on Monday between taking the deal offered by the creditors - or not having the Greek banks open properly on Tuesday morning,” said Jacob Funk Kirkegaard, a senior fellow at the Peterson Institute For International Economics.

Greeks are exasperated with austerity measures imposed on them under two bailouts by the International Monetary Fund, the European Commission and the European Central Bank. Wages and pensions have been slashed and one in four Greeks is jobless.

But after months of fractious negotiations, patience among its creditors is running dry, and some European leaders are now openly contemplating the possibility of Greece becoming the first nation to be forced out of the euro zone.