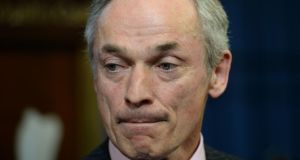 Mr Bruton, speaking to the media on Friday, went to considerable length to draw a distinction between Ireland’s ‘robust strategy’ of offering a low rate of corporation tax and the practices referred to by president Obama

The Government has insisted it does not facilitate the so-called tax inversion practices criticised by president Barack Obama in comments that referenced Ireland.

Minister for Jobs and Enterprise Richard Bruton responded to Mr Obama’s remarks by saying the anomaly which allows US multinationals dramatically reduce their tax obligations by transferring their headquarters to other countries including Ireland was a matter for the US to resolve, and not for Ireland or other countries.

Mr Bruton, speaking to reporters today, went to considerable length to draw a distinction between Ireland’s ‘robust strategy’ of offering a low rate of corporation tax and the practices referred to by president Obama.

Speaking of the Irish approach he said: “That is very different from what is being discussed in the media over the past few days in terms of tax inversion and company relocating their headquarters.

“It’s an issue that needs to be fixed but fixed in the US. President Obama in his comments has indicated that he is willing to change US tax law,” he added.

In a speech at a Los Angeles college, Mr Obama said American companies who move their headquarters overseas were “gaming the system”.

“What we are trying to do is to say that if you simply acquire a small company in Ireland or some other country to take advantage of the low tax rate [AND]you start saying, ‘we are now magically an Irish company’, despite the fact that you might have only 100 employees there and you have got 10,000 employees in the United States, you are just gaming the system,” he said. “You are an American company.”

Asked was it damaging to Ireland’s image that the US president singled out Ireland when criticising tax inversion, Mr Bruton emphasised that it was under US laws that such companies make the decisions to relocate.

The Minister of State for Finance Simon Harris also said that it was important to note that this is largely an issue for US authorities to address and said the Government have conveyed that message to the US federal government.

He pointed out that Ireland derived no benefit from the arrangement in terms or jobs or revenue going to the exchequer.

Indeed, he added, it actually costs Ireland money as contributions have to be made to the EU arising out of companies declaring Ireland as their headquarters.

“We are talking about very distinct and different issues here between corporation tax and inversion tax. It’s important that they do not get blurred,” he said.

Mr Obama comments have also promoted state investment agency IDA to insist that it does not promote the use of brass plaques for companies to base themselves in Ireland.

A spokeswoman said US firms which relocate solely for tax purposes and without a substantial presence bring no economic benefits.

“Engagements with investors revolve around convincing them to place activity into Ireland that comes with real economic substance, including employees and fixed assets.

“Transactions that rely solely on tax benefits, without substance behind them, don’t bring economic benefits to Ireland.”