Companies more confident in health of Europe’s largest economy, according to labour survey 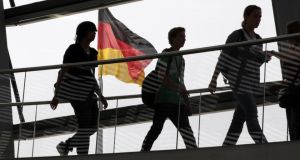 German unemployment fell for a fourth month in March as companies became more confident in the health of Europe’s largest economy. Photo: Bloomberg

German unemployment fell for a fourth month in March as companies became more confident in the health of Europe’s largest economy.

The number of people out of work decreased by a seasonally- adjusted 12,000 to 2.9 million, after falling a revised 15,000 the previous month, the Nuremberg-based Federal Labour Agency said today.

The adjusted jobless rate was unchanged at 6.7 per cent after being revised down the prior month to the lowest level in at least two decades.

Falling unemployment in Germany is supporting domestic consumption just as a recovery in the rest of the euro area, the country’s biggest trading partner, bolsters exports.

The Bundesbank says the German economy probably strengthened “substantially” in the first quarter, after an expansion of 0.4 per cent in the three months through December that beat economists’ estimates.

“The underlying trend is a gradual decline in German unemployment over the course of the year,” said Holger Schmieding, chief economist at Berenberg Bank in London. “However, unemployment cannot fall much further because the people who are still unemployed do not have the skills needed to find jobs.”

The number of people unemployed fell by 2,000 in west Germany and 10,000 in the eastern part, the labour-agency report showed.

Germany’s jobless numbers highlight how it’s faring better than the rest of the 18-nation euro area.

Figures from the European Union’s statistics office to be released at 11 a.m. in Luxembourg will probably show the unemployment rate in the currency bloc held at 12 percent in February, near an all-time high, according to a separate Bloomberg survey.