G20 accord focuses on shell firms as China drops objection 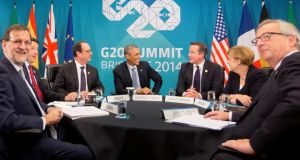 G20 leaders have backed a drive against the use of shell companies and trusts to engage in tax evasion and money-laundering, after China dropped a last-minute objection to the plan.

Following talks yesterday, the G20 published a set of principles for governments to follow that aims to make it easier to find out who is the beneficial owner of entities, which experts say facilitate hundreds of billions of dollars in illicit financial flows.

A World Bank report in 2011 found 70 per cent of the biggest corruption cases between 1980 and 2010 involved anonymous shell companies.

Last year, the G20 committed to tackling the beneficial ownership issue and drew up principles to guide governments when making national rules. At a meeting of G20 officials in Paris in September, China was concerned about the principles, saying they raised issues it needed to evaluate.

The Chinese objection surprised diplomats given that Beijing has been implementing its own tough anti-corruption drive against officials.

But following talks in Brisbane, officials said the impasse over the plan had been resolved, enabling publication of the principles and allowing the G20 to back a drive for disclosure of beneficial ownership.

The principles state countries should ensure legal persons maintain beneficial-ownership information onshore and that information is adequate, accurate and current.

It also calls on countries to ensure that information is shared between domestic and international agencies, including law-enforcement bodies.

However, the principles stop short of recommending public access to registries of beneficial ownership – a key demand of advocacy groups that campaign against tax evasion and corruption.

“This is a good but insufficient first step,” said Friederike Röder, a director of One. “But this information needs to be public to create a deterrence effect. It would also ensure developing countries that suffer from tax evasion and corruption would gain access to this information.”