FT says Ireland sets example for the rest of Europe

It’s not just the luck of the Irish, newspaper says as it praises Ireland for putting economy in order 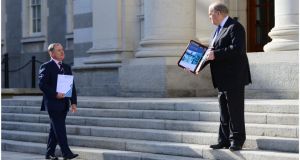 Minister for Finance Michael Noonan and cabinet colleague Brendan Howlin TD Minister for Public Expenditure and Reform pictured ahead of last year’s budget. The impact of sucessive austerity budgets means that Ireland is now an example other European countries should seek to emulate the Financial Times says. Photograph: Bryan O’Brien / THE IRISH TIMES

Struggling European economies should learn from how Ireland put its economy into recovery mode, the Financial Times says in an editorial in today’s newspaper, arguing that Ireland provides “growing evidence of how countries that shape up after a crisis can recover strongly despite an unfavourable international outlook”.

“Few countries soared as high or crashed as hard,” the newspaper says. However, a combination of “the toughest choices” for the country’s “long-suffering people” and the rebuilding of the banking sector, means that the economy is now in recovery mode.

Noting while countries such as France and Italy stagnate, “while bickering about long overdue reforms”, Ireland has posted an “astonishing” second quarter growth rate, “a pace unseen since the heady days of the early 2000s”.

“Others should learn from its example,” it says, adding that “for small, open economies such as Ireland external conditons are far less important than steps taken at home”.

However, the editorial warns that these “early glimmers of optimism” should not be mistaken for a return to the “carefree days of easy growth”. Indeed it notes that Ireland is “not yet out of the woods”, pointing to its “dangerous levels” of both public and private debt, and an unbalanced housing market.

But, it says, the recovering economy is looking to new areas of growth and is no longer relying on consumer consumption to fuel its growth, but rather to exports and overseas investment.

1 ‘No demand... because there are no people’ at well-known Dublin pub
2 Divorce: What will it cost and can you afford it?
3 Apple received $250bn dividend from Irish subsidiary in 2019
4 Transferring the family farm without a tax headache
5 Nearly 30,000 could lose pandemic payment if they do not confirm eligibility
6 Revised help-to-buy scheme opens for applications
7 Cairn Homes revenues down but average price of starter homes nudged up
8 ‘Humble’ Airbnb going back to basics
9 HSE says fix for Covid Tracker app rolled out to all Android users
10 Post-Covid television starts to shape up – but with missing pieces
Real news has value SUBSCRIBE