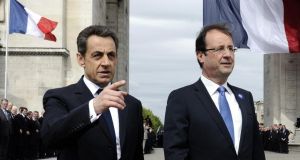 Nicolas Sarkozy and Francois Hollande: both men have had to grapple with the effects of the downturn

The initial effects of the economic crisis were blunted in France by the dominance of the public sector. Five years later, the weight of government is braking what French media have called the “little whiff of recovery”.

Advocates of liberal, free-market policies say France is like a person sitting on a railway track, and the locomotive is coming. President Francois Hollande tinkers around the edges of reform, but basically hopes to piggyback on US and German recoveries.

France endured a banking and property crisis in the 1990s, so the banks were more risk-averse than in other developed countries. French banks rushed to shed exposure to the Greek and Italian markets at the height of the European debt crisis. They’ve fought hard to forestall stricter banking regulation, and have largely succeeded.

There has been no property crisis over the past five years, though some say the Paris market is inflated and may be in for a “soft landing’.

More and higher taxes have been the government’s main response to the crisis: 84 new taxes representing €41 billion euro in the last year of Nicolas Sarkozy’s and the first year of Francois Hollande’s presidencies. Hollande has promised a moratorium on new taxes, but at the same time the government considers raising the social welfare tax to save the country’s pension system. Unless the administration acts quickly, the pension system will be €20 billion in debt by 2020. The government says people will have to work more years before retiring.

France has continued to decline in competitiveness, falling from 15th out of 148 countries in 2010 to 23rd place in rankings published on September 4th. The World Economic Forum report makes it clear that France has world-class infrastructure – for which it ranks fourth – but is dragged down by the rigidities of the labour market. Its “distorted” tax regime comes 127th; labour-management relations 135th.