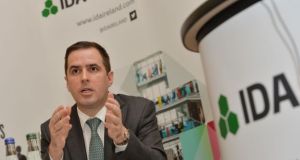 Brexit or no Brexit, the flow of new jobs into Ireland remains constant.

IDA Ireland closed out an incredibly successful week, announcing investments of more than €300 million and about 620 additional jobs.

The IDA’s investments include biopharmaceutical company MSD, which announced that it will create 330 new jobs and invest €280 million over the next three years at manufacturing sites in Carlow and Cork, and Takeda Pharmaceutical Company Ltd announcing that construction will begin on a new €40 million production facility at Grange Castle, creating 40 jobs.

To those IDA numbers you can add 250 new roles that Grant Thornton plans to add to its operation in Ireland, largely based around a centre of excellence for global compliance reporting.

It’s a continuation of a trend over the past six years that has seen the unemployment rate decline from just more than 15 per cent to 6.4 per cent in May.

IDA chief executive Martin Shanahan, who is currently in India meeting with clients, described it as “hugely encouraging” in spite of the global economic headwinds.

He was also buoyed by Ireland’s ranking in sixth position in the IMD Global Competitiveness Yearbook rankings although he acknowledged that the country could not be complacent, as highlighted by the National Competitive Council this week.

On Thursday, the council’s chairman, Peter Clinch, said the unfavourable oil and currency trends provided “a timely warning” about the vulnerability of Irish firms to external international shocks. “This reinforces the importance of prioritising policies and actions that are within Ireland’s control to enhance cost competitiveness,” he said.

Infrastructure bottlenecks, skills shortages and industrial unrest were among the domestic “pressures” listed.

There was also some better news on the income tax front, with figures for May broadly in line with expectations having trended earlier in the year below profile for no apparent reason.

All in all, a positive backdrop for whoever succeeds Michael Noonan as Minister for Finance later this month.