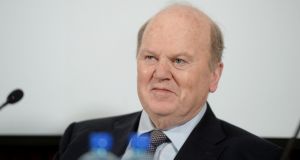 Minister for Finance Michael Noonan. The Department of Finance has been at a loss to explain the weaker-than-expected trend in income tax which is at odds with the growth in employment. Photograph: Alan Betson

The Government’s tax take for the year to date was 1.4 per cent or €268 million behind target in May, according to the latest exchequer returns.

However, the gap between actual and targeted receipts, which has been highlighted as a concern, narrowed for the first time this year as income tax and corporation tax performed better than in previous months.

The Government has collected €19.4 billion in tax for the first five months of 2017, slightly below the Department of Finance’s projected total of €19.6 billion, but up nearly 3 per cent or €550 million on last year.

Income tax, the State’s largest tax stream, was 2.6 per cent below profile at €7.6 billion. The department has been at a loss to explain the weaker-than-expected trend in income tax which is at odds with the current growth in employment.

However, it will be relieved that income tax receipts for May, which totalled €1.4 billion, were broadly in line with expectations in contrast to previous months.

Corporation tax has also underperformed the department’s target this year, coming in 10 per cent below expectations at €1.7 billion. However, business tax receipts for the month of May were ahead of projections at just over €1 billion for the first time this year.

The figures showed nearly €6.6 billion has been collected in VAT so far this year, which was nearly 4 per cent or €254 million above profile.

Better-than-expected receipts for the sales tax are indicative of a pick-up in retail, which has been slower to recover from the crash than other sectors.

The other main tax head, excise duty, was 4 per cent below target at €2.2 billion, but this was again linked to the front-loading of receipts on tobacco products ahead of plain-packaging rules.

The latest figures resulted in an exchequer surplus of €383 million compared with a deficit of €125 million for the same period last year, with the improvement attributed to increased tax revenue.

On the spending side, total expenditure was just over €17.8 billion, which was 1.5 per cent inside target.

The figures show spending on health was just over €5 billion, which was marginally inside its targeted budget for the year, while social protection spending was €8 billion, also inside budget.

“It is difficult to reconcile the figures, with a possible explanation being more part-time roles with lower pay, resulting in more people in work but less net disposable income.

“ However there simply isn’t enough data in the figures released today to draw any firm conclusions on what is underpinning the figures,” Mr Vale said.

“May is a relatively significant month for corporation tax, and the figures for the month show a welcome improvement. The 2017 returns are now back in line with the 2016 comparables, although still lagging well behind forecast.”