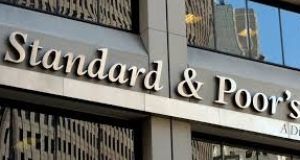 Rating agency Standard & Poor’s says it expects economic growth in Ireland to average 3 per cent over the next four years despite the “material external risks” posed by Brexit.

In its latest country specific report on Ireland, which re-affirms the State’s A+ credit rating, the agency also predicts that should the UK leave the EU without securing a free trade deal, the damage to Ireland would only be temporary.

Nonetheless, it said a key risk to its growth forecasts for Ireland would be a disorderly Brexit, noting the UK was Ireland’s largest single-country trade partner, purchasing one sixth of its exports.

In its analysis, S&P said Ireland’s indigenous exports to the UK - particularly business services, transport, agricultural products, and other consumer goods- were, on average, more price sensitive than its multinational sector exports such as pharmaceuticals, chemicals, and information technology services.

“This could render Irish indigenous exports more vulnerable to displacement from post-Brexit competition, if, for example, sterling were to weaken further against the euro,” it said.

Next Thursday’s UK election, on the same day as the European Central Bank’s monthly meeting, is expected to have a major bearing on the euro/sterling exchange rate.

While S&P suggests a hard Brexit would damage Irish growth, it believes the effect would be short-lived.

It also said that while both the UK and Irish governments have committed themselves to avoiding the reintroduction of barriers along the Border, this will ultimately be subject to the exit terms agreed upon by all 27 EU member states.

In its upbeat assessment of Ireland’s economy, it projected average annual growth here to exceed 3 per cent between now and 2020, noting that this was one of the highest projected growth rates of all developed economies.

The positive assessment was predicated on a 3.5 per cent increase in employment over the last 12 months. While wages have also started to increase, it said the rises were modest and unevenly spread across sectors.

S&P also said that household debt in Ireland was declining, noting that as of end 2016, credit to households totaled an estimated 141 per cent of disposable income versus its 2009 peak of 211 per cent.

The agency said its credit analysis was “constrained” by the complexity of Ireland’s national accounts data, which it said overstated the size of Ireland’s economy by up to one third.

However, it acknowledged that the Central Statistics Office was currently working on alternative measures to estimate the size of annual economic output that would exclude activities with limited domestic links.