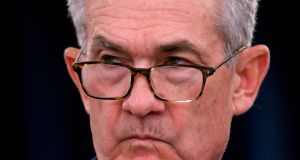 Jay Powell, the Federal Reserve chairman, faced a split among US central bank officials as he pressed ahead with a one-notch interest rate cut last month, with some calling for more aggressive easing and others resisting any action at all, complicating his task as he considers his next steps.

Minutes from the Fed’s last rate-setting committee meeting, which ended July 31st, revealed that most US central bank officials saw the 25 basis point reduction in the Fed’s main interest rate as a “recalibration of the stance of policy, or a mid-cycle adjustment, in response to the evolution of the economic outlook”.

Within that general consensus, however, there was a wide range of views on the Federal Open Market Committee (FMOC). “A couple” of members said they would have preferred a 50 bp cut in rates immediately, even if they did not formally dissent from the decision, pointing to the need for “stronger action” against “stubbornly low inflation”.

But “several” officials argued in favour of keeping rates steady, “judging that the real economy continued to be in a good place”. Two of them, Esther George, the president of the Kansas City Fed, and Eric Rosengren, the president of the Boston Fed, voted against the committee’s decision.

The diversity of views about last month’s rate cut adds to the challenge facing Mr Powell ahead of the next FOMC in September, when investors are expecting a new move by the central bank to cut interest rates.

US Treasury yields jumped on the release of the, indicating a fall in price. The yield on the policy-sensitive 2-year note rose 2.8 basis points to 1.54 per cent, while the benchmark 10-year note yield settled at 1.56 per cent.

A widely-watched bond market recession indicator continued to flash red, with the gap between three-month yields and those for the 10-year note widening to minus 41.46 basis points - the most negative since the onset of the financial crisis more than a decade ago.

US stocks remained in positive territory on the release, with the benchmark S&P 500 was up 0.9 per cent, holding onto earlier gains fuelled by optimism over consumer spending. At the same time, the dollar gained 0.05 per cent versus its peers.

Mr Powell is due to deliver a key speech in Jackson Hole, Wyoming, at a gathering of the world’s top central bankers on Friday, which could offer more insight into the Fed’s thinking.

Mr Powell has stressed that he is approaching monetary easing with caution, but has come under pressure from both investors and US president Donald Trump to move much more decisively.

In his latest challenge to Fed independence, Mr Trump on Wednesday called Mr Powell a “golfer who can’t putt” and attacked him for being the “only problem” afflicting the slowing US economy. “Wake up Federal Reserve,” he said.

According to the minutes, there were signs the Fed was leaning towards more aggressive action. Officials discussed how low borrowing rates and strong equity markets “appeared to be premised on expectations that the Federal Reserve would ease policy to help offset the drag on the economy” from global developments and “provide some insurance” against downside risks.

“A few” Fed officials worried about the inversion of the Treasury yield curve - which has been an indicator of looming recession in the past - saying it “could indicate that market participants anticipated weaker economic conditions in the future and that the Federal Reserve would soon need to lower the fed funds rate substantially in response”.

But “a number” of Fed officials suggested that policymakers should “remain flexible” and focused on “incoming data” in the future, considering “the nature of many of the risks they judged to be weighing on the economy, and the absence of clarity regarding when those risks might be resolved”.

The case for deeper interest rate cuts was bolstered the day after the last Fed meeting, when Mr Trump announced new tariffs on a wide range of Chinese imports, leading to a new escalation in tensions with Beijing and jolting financial markets.

The uncertainty surrounding international trade was one of the primary reasons for the rate cut in July, the first since the financial crisis. While Fed officials had been comforted by a truce reached by Mr Trump, and Xi Jinping, the Chinese president, at the G20 summit in Osaka, Japan, a few weeks earlier, that positive development was shattered by the US president’s new escalation.

It remains unclear how much weight the Fed will be giving to the risks from trade uncertainty and a slowing global economy, as opposed to hard economic data, in judging its next move.

Job growth in the US has remained solid, with unemployment near record lows, and consumer spending has been buoyant, even though confidence has shown signs of weakening. But as well as tepid inflation, the biggest alarm bells about the US economy have come from weak business investment and lacklustre manufacturing data, which are most influenced by trade and global developments. – Copyright The Financial Times Limited 2019