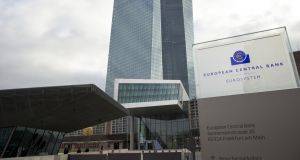 Euro zone core inflation slowed for the second month in a row in December, a big headache for the European Central Bank, which has printed hundreds of billions of euros to kick-start price growth with little to show for it.(Photograph: Jasper Juinen/Bloomberg)

Euro zone core inflation slowed for the second month in a row in December, a big headache for the European Central Bank, which has printed hundreds of billions of euros to kick-start price growth with little to show for it.

Inflation has undershot the ECB’s target for nearly three years and even radical policy steps including €1.5 trillion of asset purchases will take years at best to push price growth back towards 2 per cent, threatening the bank’s credibility. Opponents of policy easing had relied on relatively strong readings of core inflation, which excludes volatile energy and food prices, in arguing that weak price growth was mostly an effect of the big oil price fall. But even core data has started to soften, indicating that low energy prices are feeding into the price of goods and services very quickly.

Headline inflation, targeted by the ECB, held steady at 0.2 per cent, missing expectations for a rise to 0.3 per cent and still far short of the bank’s target, Eurostat said. Meanwhile core inflation, closely watched by policy hawks like Germany’s Bundesbank, eased to 0.8 per cent from 0.9 per cent in November and 1 per cent in October.

“The numbers we got today are a tentative indication that inflation may not pick up as the ECB had forecast a month ago,” said Kenneth Broux, head of corporate research, FX and rates at Societe Generale. “It gives the market the reason to believe, and that’s certainly our forecast, that the ECB will come back and do more, potentially as soon as March, in terms of cutting the deposit rate and expanding the quantitative easing programme even more.”

ECB President Mario Draghi has warned that low core inflation is a worry because it is a good predictor of where inflation is likely to stabilise in the medium-term. The 19-country euro zone’s central bank cut its deposit rate deeper into negative territory in December and extended its asset purchase scheme by six months, hoping to boost price growth and bolster long-term inflation expectations. “The ECB will probably soon have to give up hope of a stronger underlying price momentum this year. Further monetary easing will therefore stay on the agenda,” Commerzbank said. But easing may not be imminent, as growth, lending and jobs data has been surprisingly strong. One of the ECB’s doves, vice president Vitor Constancio, meanwhile argued recently for steady policy for the “foreseeable future”. Growth in lending to households, a future indicator of economic growth, rose to its highest level since late 2011 in November, while corporate lending growth was at its highest since early 2012.

The euro zone purchasing managers’ index for manufacturing rose to a 20-month high of 53.2 in December, data on Tuesday showed, while unemployment in Germany, the bloc’s biggest economy, held steady at its lowest since reunification in 1990. “The ECB will not like these inflation numbers ... Nothing points to a significant pick-up in core inflation,” Nordea said. “While the January meeting will most likely be for wait-and-see, March could be more interesting.”