European Commission could demand changes to Ireland’s budget next month 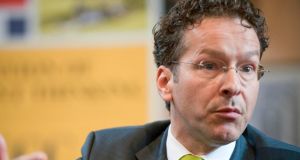 Head of the euro group Jeroen Dijsselbloem announced an extra meeting of euro zone finance ministers will take place on November 22nd to sign off on the budgets of the 17 euro zone states. Photograph: Michael Mac Sweeney/Provision

The European Commission is reserving the right to demand changes to Ireland’s budget next month if the Government is deemed to have made insufficient fiscal adjustments, according to senior EU sources.

It comes as the head of the euro group Jeroen Dijsselbloem announced an extra meeting of euro zone finance ministers will take place on November 22nd to sign off on the budgets of the 17 euro zone states.

Minister for Finance Michael Noonan is due to present Budget 2014 on October 15th.

This year sees the introduction of the EU’s so-called two pack rules, which gives Brussels extra powers over national budgets in the euro zone. National governments of the 17 states must present their 2014 budgets to Brussels by October 15th for review. The commission will then produce an opinion on the budgets by mid-November, with the euro group signing off on the budgetary plans on November 22nd.

“The commission is monitoring the situation closely,” a senior European Commission source said yesterday. “While Ireland has done a lot to restore investor confidence, it still has the highest deficit in Europe. It is very important not to signal to the markets that there is any slowdown in its commitment to repair the public finances.”

The comments come at the end of a week when Tánaiste Eamon Gilmore publicly questioned the need for Ireland to commit to a budget adjustment of €3.1 billion. “We will not let the Irish economy become some type of economic experiment for austerity hawks,” he said in an interview with the Financial Times.

Tensions have emerged in recent months between Dublin and its EU-IMF lenders over the scale of budget adjustment needed this year, particularly in light of the exchequer savings generated by the Anglo Irish Bank promissory note deal struck this year. Last July, the head of the euro zone rescue fund, the ESM, warned that Ireland’s failure to adhere to budgetary targets would “not be well received” in Europe. The Central Bank in Dublin has also called on the Government to implement the full €3.1 billion in spending cuts and additional taxes in next year’s budget.

Speaking in Vilnius, Minister of State for Finance Brian Hayes said it was too early to assess the exact level of budget adjustment that would be made this year, as the Government still awaited certain information, including GDP data. However, Mr Hayes suggested it would be preferable to produce a deficit reduction that is above the stated deficit target. “In every year this Government has put a budget to Dáil Éireann, the outcome of which has produced a deficit target that has surpassed our targets to our international funders, to the country. I think we should continue with that this year.”