Analysis: The appetite for euro-critical debate is growing in German newspapers 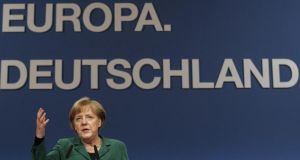 For five years, Angela Merkel has invoked one adjective to push through her euro crisis strategy against growing domestic resistance: alternativlos (without alternative).

Tomorrow, about 1,300 people who beg to differ will pack into Berlin’s Intercontinental Hotel for the founding party conference of the Alternative für Deutschland (Alternative for Germany or AfD).

Germany’s newest protest party has a dramatic, crisis-era sales pitch to German voters. The euro was a “fatal mistake that threatens all our prosperity”, it says in its manifesto, thus a return to national European currencies and an “orderly dissolution” of the single currency is necessary.

Otherwise the party demands a change of EU treaties to allow Germany’s exit from the euro – vetoing further loans from the European Stability Mechanism bailout fund as leverage if need be. “We present an alternative to the so-called ‘no-alternative’ politics,” proclaims its manifesto.


Light bulbs and cucumbers
On Europe, it vows allegiance to the Treaty of Rome principles but “emphatically supports the position of David Cameron. for a slimmer, more competitive EU” and a return of competences to national parliaments. The Bundestag can decide for itself over light bulbs or cucumber curvature.”

Within weeks, the AfD says it has attracted more than 7,000 members. But media hype does not always translate into votes and Germany has an election system that is notoriously impervious to new arrivals.

At this early stage, there appear to be three main pools of support. First: a large number of German professors and academics who like being right and dislike the compromises inflicted on their purist theories by the reality of mainstream party politics. This group segues into a second: well-off, middle-class voters, utterly untouched by a euro crisis, who nevertheless fear a plot by Europe’s dubious periphery to plunder their savings. Livening things up is a third group: publicity-hungry soldiers of fortune and political extremists who hop on every political bandwagon that passes by in Germany, but soon disembark again.

What unites them is a two-decade dislike of the single currency and a conviction that the crisis chaos can be harnessed to demand radical change.


Prosperity chauvinism
As the euro crisis rolls on, Germany’s crisis debate is increasingly shot through with a uniquely German brand of prosperity chauvinism. With no sense of economic hardship here, periphery countries are condemned as “debt sinners” who need to “do their homework” to boost economic competitiveness and reduce deficits in exchange for financial assistance.

Criticisms directed at Germany from its neighbours – the wider economic and social effects of extended periods of austerity measures, for instance – have not gained traction in the debate here.

When Angela Merkel is criticised, it is not for being too tough, but for being too soft. The AfD is poised to shape and amplify this criticism by questioning her efforts to patch up what it dubs an illegitimate project.

To date, Merkel has not acknowledged the rise of the AfD. But she will have to take on the new arrivals if she is to abide by the golden rule for all CDU leaders: do not tolerate political upstarts further right on Germany’s political spectrum.

The CDU could face a second right-wing, euro-critical upstart: the Free Voters. They want to extend its political reach beyond its Bavarian base and scored a coup last year by winning as its lead candidate for the general election Stephan Werhahn, grandson of Konrad Adenauer.

But, a year after his defection from CDU, the Free Voters are racked by infighting and Werhahn has quietly returned to the party his grandfather co-founded and the promise of a safe seat in a conservative southwest constituency.

It is not clear if the two euro-critical parties will agree a co-operation to boost their chances in September’s general election. To maximise its appeal, the AfD has targeted social conservative CDU voters who are feeling neglected under Merkel, as well as economic liberal voters disillusioned with her Free Democratic Party coalition partner.

It may try to broaden its voter base even further to centrist voters doubtful that the opposition Social Democratic Party crisis solution – including jointly issued euro bonds – poses a credible alternative.

Even if that is not enough to enable it to enter the Bundestag, it could still have the potential to alter the election arithmetic.

The distortive potential of Germany’s new political arrivals was already clear last January, when a euro-critical alliance garnered 39,000 votes, or 1.1 per cent, in the state election of Lower Saxony. While not enough to secure any seats in the Hanover parliament, it was more than enough to deprive outgoing CDU governor David McAllister of the votes he needed for another term.

The appetite for euro-critical debate is growing in German newspapers – though none has, as yet, backed the AfD – and bookshops are filled with euro-critical tomes.

One interesting book, taking a critical look at Germany’s road into the currency union, carries the title Zwangsumtausch (Forced Exchange) – a play on the obligatory purchase of Ostmarks for all visitors to East Germany.

Journalist Jens Peter Paul conducted interviews with many key single-currency players and even got Helmut Kohl to admit he played the “dictator” by pushing through the euro without a referendum in Germany because he knew he wouldn’t get the result he wanted.


Post-unification haze
Paul’s conclusion is this: German politicians, in a post-unification haze of gratitude and self-effacement, abandoned their critical faculties to embrace a currency project that was heavy on political aspiration but light on economic sense.

Such critical thinking on the euro is nothing new around Europe but hot stuff by German standards. In September’s general election, this crisis-weary zeitgeist is the battle ground between Angela Merkel’s alternativlos politics and the upstart Alternative for Germany.