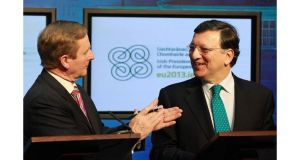 European Commission president José Manuel Barroso has moved to clarify his earlier comments about the Irish economy having turned a corner.

At an Ibec convention in Dublin earlier this morning, Mr Barroso said the Irish economy was "turning a corner", citing figures released yesterday about the increase in employment here last year.

This afternoon, Mr Barroso said he was not suggesting things were easy for people and stressed he had the “greatest respect” for the sacrifices that the Irish people had made. “We can see the light at the end of the tunnel,” he said.

President of the European Parliament Martin Schultz said he had been “deeply impressed” by the response of the Irish people to the crisis. Mr Schultz said Europe should not forget that the Irish had prevented a European-wide banking system crash.

The pair were speaking at Government Buildings following a meeting with Taoiseach Enda Kenny and Tanaiste Eamon Gilmore.

Mr Kenny said words of hope and confidence were very important for the morale of people. He said there were signs of confidence in the economy but no room for complacency.

Mr  Gilmore said the people who had borne the burden of the adjustment were the people who in some cases had lost jobs, seen a reduction and were struggling with mortgages.

Employment figures published yesterday give the strongest indication in half a decade that economic recovery has begun. For the first time since the recession started in 2008, the numbers at work have risen over a six month period.

In the final quarter of the year, 1.85 million people were in jobs, a rise of 6,500 on three months earlier according to seasonally adjusted figures from the Central Statistics Office. Revisions to the third quarter data show that employment growth was also recorded in that period. Those revisions put the net increase in employment in the third quarter at 2,200.

It is the first time since employment began to contract in 2008 that jobs growth has been recorded in two consecutive quarters.

This morning, Mr Barroso said Europe faced a moment of truth. "Either we recognise that business as usual will consign us to a gradual decline, to the second rank of the new global order. Or we take the bold and ambitious course of growth."

He saluted what he described as concerted efforts being made in member states, like Ireland, to consolidate national budgets and to implement structural reforms. "We see in Spain, here in Ireland, and in Portugal, the progress that can be made when the political will of governments and the determination of the population come together to build a better future."

In his speech, Mr Barosso, said: "Confidence is returning to Ireland and to Europe. The Irish economy is turning a corner. You can be part of creating that positive, growth enhancing climate."

While the economic crisis had been triggered by events in the financial markets, he said it exposed "two very fundamental" problems. "The first, a generalised loss of external competitiveness. The second, latent internal competitive imbalances that left the European Union, and the euro area in particular, vulnerable to asymmetric economic shocks," he said. "Before the crisis there was a collective failure to address these emerging competitiveness gaps, even among those member states who shared a common currency."

The European mechanisms which had been in place to correct the problems "were sometimes ignored, sometimes deliberately circumvented," he said.

Mr Barroso said the single market remained "Europe's greatest asset" when it came to competitiveness as it allowed European businesses the scope to grow to a size where they can become world leaders. He said the European Union was prioritising measures to complete the opening up of core network industries such as rail and energy.

Mr Barroso cited the example of Ireland's burgeoning export electricity market. "Thanks to an EU funded interconnector [a €300 million loan from the European Investment Bank and a €100 million grant from the European Union budget] Ireland's new renewable energy sources can be developed and sold into the UK market."

While society as a whole will benefit from increasing competitiveness across the union, "it is not an option that some sectors of the population alone bear the brunt of the change whilst others cream off the profits", he said. "Here in Ireland, and all around Europe, too many young people are asking if they will ever find a job or have the same quality of life as their parents," he said. Mr Barroso said member states needed to give these young people "a better prospect".

Mr Kenny said Ireland, like many countries in Europe, had experienced an unemployment shock in the past few years "from which we have yet to recover from".

He added: "We cannot allow economic recovery to be a jobless recovery."

Admitting that Europe's collective response to the financial crisis had been frustratingly slow, Mr Kenny said his Government was rebuilding the economy by transitioning it from a failed model based on property speculation, banking and debt to a sustainable economy based on enterprise, innovation and exports.

Mr Kenny said as much as 90 per cent of future global growth is set to be generated outside Europe, highlighting the importance of building on bilateral trade agreements with US, Canada, Japan and China.

Regarding Ireland's fiscal position, he said: "It has been a tough few years for all of us, but it has been especially challenging for Ireland. I'm glad to say that significant progress has been made in dealing with the many legacy problems that were left by previous administrations."