Moscovici, however, emphasises that time is running out for beleaguered Athens government 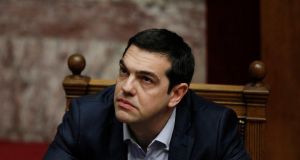 The European Union’s monetary affairs chief said on Monday that Greece and its EU partners were now closer to an understanding on many areas of reform, with Athens being more constructive on privatisations, but emphasised that time was running out.

“We have moved closer to common understanding on reforms to be adopted in a number of areas,” European Economic and Monetary Affairs Commissioner Pierre Moscovici told reporters in Berlin, citing Greece’s value-added tax system, its independent revenue administration and the control of non-performing loans.

“The government has also been engaging more constructively on the issue of privatisations - which are necessary for a competitive economy - and there are, I would say, promising signals as regards the reform of the gas markets,” he said.

Mr Moscovici, in Berlin for talks with finance minister Wolfgang Schaeuble and members of parliament before going on to Frankfurt to meet European Central Bank chief Mario Draghi, repeated that time was short for Greece to agree to reforms in return for funding.

Investors dumped Greek stocks and bonds on Monday on worries that Athens could miss a payment to the International Monetary Fund due next month. “Time available to reach an agreement at staff level is now, I would say, very limited,” said Mr Moscovici.

“We have got to conclude before the end of May.” “The only scenario that we consider in the Commission is Greece in the euro zone,” said the commissioner, adding that his political experience had taught him it was best not to discuss a Plan B “because that means you don’t believe in Plan A”.

Investors, meanwhile, dumped Greek bonds as the country’s precarious finances and reluctance to carry out reforms suggested it would struggle to make a key debt payment due next month.

In a leaked internal memo, first disclosed by Britain’s Channel 4 on Saturday, the International Monetary Fund acknowledged Greece had little chance of making the payment on June 5th and said it would not be pushed into a “quick and dirty” review to disburse further bailout funds to Athens.

Prime minister Alexis Tsipras had warned Greece’s creditors that it would miss a May 12th payment to the IMF earlier this month. It made the payment only by emptying an IMF holding account. Rating agencies say they would not put Greece into default if it missed an IMF payment.

Italian and Spanish yields were up 6 bps at 1.86 per cent and 1.81 per cent, respectively. Yields on German bonds were broadly unchanged, steadying after three-weeks of sharp swings. They outperformed other euro zone benchmarks as some investors took cover from the Greek market fallout.

1 In this strangest of recessions, what happens next for Ireland?
2 Bank of Ireland sees about 2,000 staff apply for voluntary redundancy
3 Michael O’Leary is the boss you want to lead an airline out of crisis
4 Ireland’s Covid-19 economy in five graphs
5 Minister seeks AG’s advice on banker accountability laws
6 EY Entrepreneur of the Year: nominee profiles
7 Should I switch bank now with Ulster Bank at risk of closing?
8 Ireland is in danger of losing the woods for the trees on emissions reduction
9 Estée Lauder staff at Dublin airport plan further strike action
10 Fortnite owner signs multimillion deal to buy Irish ‘kidtech’ firm
Real news has value SUBSCRIBE