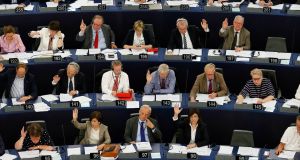 The European Parliament voted overwhelmingly in favour of a European Commission anti-tax avoidance package on Wednesday, though most Irish MEPs abstained or rejected the proposal.

The European Parliament voted overwhelmingly in favour of a European Commission anti-tax avoidance package on Wednesday, though most Irish MEPs abstained or rejected the proposal.

Fine Gael´s four MEPs broke with their parliamentary group, the European People´s Party, and rejected the measure on the grounds that it breached the principle of tax sovereignty.

“This was supposed to be a report advocating sound rules to curb tax avoidance practices. Instead, it went above and beyond this goal and was used as a way of delving into Member States tax sovereignty by the back door,” Fine Gael´s Brian Hayes, Sean Kelly, Mairead Mc Guinness and Deirdre Clune said in a joint statement.

The MEPs also argued that the report aimed to define what constitutes a minimum effective tax rate for companies. “It is clear in the EU treaties that corporate tax rates are decided by member states alone and that should not be changed,” they said.

Despite delivering a strong critique of the Irish corporate tax system in a debate on the proposal in the Parliament on Tuesday, Sinn Féin´s Matt Carthy rejected the new Commission proposal, which aims to tackle corporate tax avoidance by companies.

In a statement, Sinn Féin said they had welcomed some of the initiatives, but ultimately voted against the overall package amid fears it could infringe on the tax sovereignty of member states.

The Irish Government has given a lukewarm welcome to the European Commission’s latest attempt to clampdown on tax avoidance, which has become a key EU priority in the wake of the ‘Luxembourg Leaks’ and ‘Panama Papers’ scandals.

Though the commission’s proposal was unveiled by EU economics commissioner Pierre Moscovici in January, it must still be endorsed by all member states. Among the measures included in the legislative proposal are moves to clamp down on the establishment of company subsidiaries to benefit from attractive interest payment structures, and the tightening-up of so-called “switch-over” rules that apply to earnings taxed in a non-EU country that are then transferred to an EU member state.

Minister for Finance Michael Noonan raised concerns at last month´s ecofin meeting of EU finance ministers that the principle of a minimum effective tax rate could be inscribed in the new rules, thereby setting a precedent for future tax measures.

Independent MEP Nessa Childers was the only Irish member of the European Parliament to endorse the package. Speaking after the vote, she said it was vital that tax should be paid where profits are made, arguing that the EU´s measures were “not an attack on individual countries or companies.”

She criticised the fact that some MEPs had come under fire for “supposedly pointing the finger at their own country,” a reference to Sean Kelly´s criticism of Matt Carthy´s intervention during the parliamentary debate in which the Sinn Fein MEP suggested that Ireland s reputation as a tax haven was justified.

Independent MEPs Luke Ming Flanagan and Marian Harkin abstained in the final vote. Marian Harkin said that while she had voted against some parts of the package, the OECD was the international body tasked with ensuring tax justice.

“Ireland is complying with OECD proposals and that should be our focus at European level,” the Midlands North West MEP said.