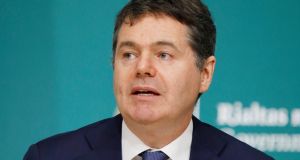 Minister for Finance Paschal O’Donohoe. The Government had been expecting a €2.2 billion surplus in 2020. A €19 billion deficit is now being forecast. Photograph: Leon Farrell/Photocall

There is a peculiar paradox at the core of this crisis. Though we are confronting an economic meltdown there is nothing essentially wrong with the economy.

We have significant problems in health and housing but they stem from long-standing structural issues and underinvestment, not from some innate dysfunction in the economy itself.

We haven’t been hit by a bomb or bet the house on a defunct asset like in 2008, we’ve simply turned the economy off.

This has created a unique challenge for Government in trying to keep workers and businesses in a state of suspended animation while the threat to public health is contained.

The fact that 70 per cent of the Irish workforce – 1.6 million workers - are employed in small and medium-sized firms (SMEs), many in what are called micro enterprises, those with 10 staff or fewer, makes this doubly problematic.

These businesses don’t have the cashflow or the resources to last even a few months without trading. This explains why there was an almost instantaneous explosion of layoffs after the economy went into shutdown mode last month.

The number of people seeking some form of unemployment benefit tripled to more than half a million in March, a per-capita increase that was bigger than anything seen elsewhere in Europe. And the longer this hiatus goes on, the more of these viable businesses will fail.

A study by Trinity Business School, published before the virus hit, modelled the impact of a sudden exit of firms from a sector such as tourism or retail.

It found that a rapid cluster of businesses closures had a near-permanent scarring effect on the industry in terms of employment and profit, typically lasting up to 15 years if there wasn’t a countervailing force or stimulus.

“We can see that an exit bears significant and lasting economic and social costs and therefore any measure to prevent widespread closures of businesses in the midst of a crisis ought to factor in the enormous cost of not supporting firms in danger of closure,” Andrew Burke, dean of the Trinity Business School and one of the study’s authors, says. It illustrates the importance of trying to keep SMEs afloat in a crisis.

The Government’s financial packages that a month ago looked big, now suddenly look weak in the face of Central Bank predictions that the shutdown could cause up to 500,000 job losses and an 8.3 per cent contraction in the economy, rising to 15 per cent if the lockdown has to be extended.

These reversals are sharper and swifter than anything the 2008 crisis threw at us.

The Government’s plan to cover up to 70 per cent of the wages of employees laid off due to the pandemic is a necessary corrective, and may need to extended beyond three months even if the restrictions are lifted, but having the wage bill covered won’t be enough for many businesses.

The point is that many will quickly find themselves in a liquidity crisis from not trading. Just look at how the Government’s own finances have changed. It had been expecting a €2.2 billion surplus in 2020. A €19 billion deficit is now being forecast, primarily on the back of falling tax revenues.

Workers and businesses will need to be given some sort of deal on debt. Speaking at an event hosted by the Dublin-based Institute for International and European Affairs this week, former International Monetary Fund chief Ajai Chopra called for some sort of “standstill on private debt repayments”.

The banks, which had their own debt socialised after the financial crisis, hold the key to this. They have charged individuals and businesses here a premium over and above the European average in a bid to repair their balance sheets.

Preserving this interest rate margin must now be jettisoned for the greater good, particularly when the banks are reporting healthy profits. If the banks stick to a policy of holding firm against anything that poses a threat to their PnL (profit and loss), the lasting damage to the economy here will be greater. A scenario that is inimical to the banks themselves.

With China reporting zero new Covid-19 deaths for the first time since January and Italy and Spain reporting a slowdown in the rate of infection, there is growing optimism that we may soon be able to consider at least a partial lifting of the restrictions, albeit in conjunction with mass testing.

An additional problem is what lies on the other side in terms of consumer behaviour. Of course, there’ll be a post-crash wariness to spend, at least for a time, but will people go out to crowded bars, attend events in packed stadiums, travel on aircraft while the threat of infection lingers? This could be the real scarring legacy of the Covid-19 virus, the one that could permanently destroy thousands of businesses and jobs.

1 Apple tax case: Four individual lawyers paid over €500,000 each
2 Should my mam wait for house prices to drop before buying?
3 Parts of Brown Thomas and Arnotts to reopen next week
4 Brother is dragging his heels as executor of uncle’s will - is there anything I can do?
5 Thailand attempts to lure travellers with luxurious lockdown options
6 ‘I have a talent for justifying purchases’
7 Irish comic book artist designs face mask coverings for young flyers
8 Irish whiskey sales near milestone of 12m cases a year
9 Printing firm Reads secures injunction preserving Nassau Street access
10 Hangover for the drinks sector as pint sales go flat
Real news has value SUBSCRIBE