Rules ‘restricted the scope for external oversight’ during the boom 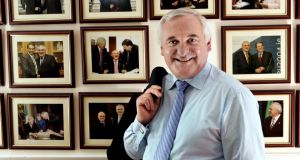 Bertie Ahern. Should have been running increasing budget surpluses during the noughties. Photograph: Matt Kavanagh

Economist John FitzGerald of the ESRI throws an eye over the topic of EU governance arrangements in a short essay that forms part of Towards a Better Governance of the EU ?

He notes that Ireland and Spain were adhering to the Stability and Growth Pact in the years prior to the bust and that, with the benefit of hindsight, they should have been running increasing government surpluses in the middle years of the noughties [the Bertie years], to keep output close to potential and prevent a bubble. He refers to a 2010 paper by Jim O’Lear, External Surveillance of the Irish Fiscal Policy during the Boom , which found that the EU Commission and IMF did not raise the alarm in the period up to 2008, and could not issue a “speeding ticket” to Ireland, as it was staying within the rules. The rules “restricted the scope for external oversight”, something he suggests that should be borne in mind when new rules are being drafted.

As to the new rules that have been introduced, he notes that they ignore the desirability of taking counter-cyclical fiscal action when the euro area is operating above or below potential. While it is clear that Ireland, Spain, Portugal and Greece could not, and should not, have run counter-cyclical policies during the crisis, it would have been desirable to have done so during the 2010 to 2013 period at the euro area level. The new rules do not provide a mechanism for such co-ordinated action in the future.

While European Monetary Union may not have been the cause of the crisis, it did enhance the danger to other states of a crisis in one euro member state. FitzGerald notes that some believe EMU will require a fuller fiscal union if it is to survive. He is not sure of the need to go down that road, if the euro area is returned to sustainable growth with lesser measures. However, he notes that it will be more difficult to implement counter-cyclical polices at the euro area level in the absence of such a union.