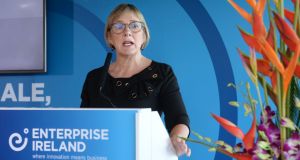 Enterprise Ireland chief executive Julie Sinnamon: “We have to work on the basis that Brexit will create new barriers to Irish trade with the UK.” Photograph: Dara Mac Dónaill

Client companies of Enterprise Ireland have reported a major slowdown in the growth of Irish exports to the UK in the wake of Brexit.

In its latest report, the State agency responsible for helping Irish companies access international markets said export growth to the UK had slowed from 12 per cent in 2015 to 2 per cent last year.

The fall-off was largely due to a decline in food exports, which have been worst hit by the recent depreciation in sterling. The UK accounted for about a third of the €21.6 billion in exports from Enterprise Ireland-supported firms last year.

“The fact that the growth of exports to the UK has slowed suggests that the impact of Brexit on Irish companies has already started,” said Enterprise Ireland chief executive Julie Sinnamon.

“Companies cannot afford to wait until the Brexit negotiations conclude – they must act now,” Ms Sinnamon said. “While diversifying from the UK might have been a desirable objective for Irish companies in the past, Brexit means that it is now an urgent imperative.”

In response to the challenges posed by Brexit, Enterprise Ireland has launched a new euro-zone strategy, which aims to boost Irish exports to the bloc by 50 per cent to €6 billion by 2020.

Speaking at the launch, Taoiseach Enda Kenny said helping companies to diversify into European markets was a significant plank of the Government’s overall Brexit strategy.

“Following the UK’s decision to leave the EU, the Government immediately acted to ensure our enterprise agencies had additional resources in order to offer all available assistance to our exporters to prepare for the challenges posed by Brexit,” he said.

Enterprise Ireland said its strategy would see it partner some 600 client companies, about half of which are what it described as “euro-zone start” – ie relatively new to the euro-zone market and heavily reliant on the UK.

The remainder were “euro-zone scale”, meaning they were already exporting into the bloc, it said.

Ms Sinnamon said some of the additional resources would be used to fund euro-zone market research and feasibility grants.

“This strategy is about driving one of the most significant shifts in the footprint of our client exports in the euro zone,” she said. “We have to work on the basis that Brexit will create new barriers to Irish trade with the UK.

“On the other hand, euro-zone markets can provide currency stability, proximity and potential for growth and opportunities for Irish companies,” she added.

Despite the economic uncertainty hanging over world markets, exports from Enterprise Ireland client companies grew by 6 per cent to €21.6 billion last year. The UK accounted for more than a third of the total.

Export sales grew across most territories, the agency noted, with growth in the United States and Canada jumping by 19 per cent to €3.7 billion, followed by the Asia Pacific region, which was up 16 per cent to €1.8 billion.

On a sector-by-sector basis, the strongest export growth globally was in software and internationally traded services. which grew by 16 per cent to €4.3 billion.

Life sciences, engineering, cleantech, paper print, packaging and electronics exports rose by 10 per cent to €3.9 billion while construction, timber and consumer retail exports increased by 8 per cent to €2.9 billion.