Enslave the robots and free the poor 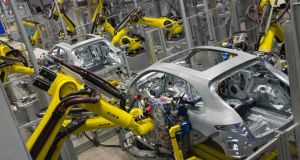 In 1955, Walter Reuther, head of the US car workers’ union, told of a visit to a new automatically operated Ford plant.

Pointing to all the robots, his host asked: “How are you going to collect union dues from those guys?” Mr Reuther replied: “And how are you going to get them to buy Fords?” Automation is not new. Neither is the debate about its effects. How far, then, does what Erik Brynjolfsson and Andrew McAfee call The Second Machine Age alter the questions or the answers?

I laid out the core argument last week. I noted that the rise of information technology coincides with increasing income inequality. Lawrence Mishel of the Washington-based Economic Policy Institute challenges the notion that the former has been the principal cause of the latter.

Mishel notes: “Rising executive pay and the expansion of, and better pay in, the financial sector can account for two-thirds of increased incomes at the top.”

Changing social norms, the rise of stock-based remuneration and the extraordinary expansion of the financial sector also contributed. While it was a factor, technology has not determined economic outcomes.

Yet technology could become far more important. Brynjolfsson and McAfee also argue that it will make us more prosperous; and it will shift the distribution of opportunities among workers and between workers and owners of capital.

The economic impacts of new technologies are many and complex. They include: new services, such as Facebook; disintermediation of old systems of distribution via iTunes or Amazon; new products, such as smartphones; and new machines, such as robots. The latter awaken fears that intelligent machines will render a vast number of people redundant. A recent paper by Carl Frey and Michael Osborne of Oxford University concludes that 47 per cent of US jobs are at high risk from automation.

Computer capital
In the 19th century, they argue, machines replaced artisans and benefited unskilled labour. In the 20th century, computers replaced middle-income jobs, creating a polarised labour market. Over the next decades, however, “most workers in transport and logistics occupations, together with the bulk of office and administrative support workers, and labour in production occupations, are likely to be substituted by computer capital”.

Moreover, “computerisation will mainly substitute for low-skill and low-wage jobs in the near future. By contrast, high-skill and high-wage occupations are the least susceptible to computer capital.” This, then, would exacerbate inequality.

Jeffrey Sachs of Columbia University and Laurence Kotlikoff of Boston University even argue that the rise in productivity might make future generations worse off in aggregate.

The replacement of workers by robots could shift income from the former to the robots’ owners, most of whom will be retired and are assumed to save less than the young. This would lower investment in human capital because the young could no longer afford to pay for it; and in machines because savings in this economy would fall.

The argument that a rise in potential productivity would make us permanently worse off is ingenious. More plausible, to me at least, are other possibilities: there could be a large adjustment shock as workers are laid off; the market wages of unskilled people might fall far below a socially acceptable minimum; and, combined with other new technologies, robots might make the distribution of income far more unequal than it is already.

So what should be done?

First, the new technologies will bring good and bad. We can shape the good and manage the bad.

Second, education is not a magic wand. One reason is that we do not know what skills will be demanded three decades hence. Also, if Frey and Osborne are right, so many low- to middle-skilled jobs are at risk that it may already be too late for anybody much over 18 and many children.

Finally, even if the demand for creative, entrepreneurial and high-level knowledge services were to grow on the required scale, which is highly unlikely, turning us all into the happy few is surely a fantasy.

Third, we must reconsider leisure. For a long time the wealthiest lived a life of leisure at the expense of the toiling masses. The rise of intelligent machines makes it possible for many more people to live such lives without exploiting others. Today’s triumphant puritanism finds such idleness abhorrent. Well, then, let people enjoy themselves busily. What else is the true goal of the vast increases in prosperity we have created?


Redistribution programme
Fourth, we will need to redistribute income and wealth. Such redistribution could take the form of a basic income for every adult, together with funding of education and training at any stage in a person’s life. In this way, the potential for a more enjoyable life might become a reality. The revenue could come from taxes on bads (pollution, for example) or on rents (including land and, above all, intellectual property).

Property rights are a social creation. The idea that a small minority should overwhelming benefit from new technologies should be reconsidered. It would be possible, for example, for the state to obtain an automatic share in the income from the intellectual property it protects.

Finally, if labour shedding does accelerate, it will be essential to ensure that demand expands in tandem with the rise in potential supply.

If we succeed, many of the worries over a lack of jobs will fade away. Given the failure to achieve this in the past seven years, that may not happen. But we could do better if we wanted to.

The rise of intelligent machines is a moment in history. It will change many things, including our economy. But their potential is clear: they will make it possible for human beings to live far better lives.

Whether they end up doing so depends on how the gains are produced and distributed. It is possible that the ultimate result will be a tiny minority of huge winners and a vast number of losers. But such an outcome would be a choice not a destiny. A form of techno-feudalism is unnecessary.

Above all, technology itself does not dictate the outcomes. Economic and political institutions do. If the ones we have do not give the results we want, we must change them. – (Copyright The Financial Times Limited 2014)