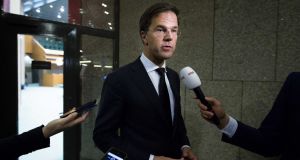 The Dutch prime minister Mark Rutte is concerned over the prospect of the UK leaving the EU.

Dutch prime minister Mark Rutte warned the UK against voting to leave the European Union, saying that life outside the world’s biggest trading bloc would harm Britain’s status as a global financial centre and prove to be economically damaging.

Speaking in an interview at the Dutch ambassador’s residence in Tokyo on Monday, Mr Rutte said that an exit from the EU would mean the UK becoming “a mid-sized economy in the middle of the Atlantic Ocean, in neither America nor Europe.”

“It would no doubt take away a lot of economic potential, and be a killer for the London financial center,” he said.

Mr Rutte’s comments are a reminder to UK prime minister David Cameron that this country’s European partners are increasingly concerned at the outcome of the referendum the British government has said it will hold by the end of 2017.

Mr Rutte, whose country takes over the rotating presidency of the EU in the first half of next year, said it was in the best interests of the UK, and the union as a whole, for Britain to stay in the 28-nation bloc. ‘

Mr Cameron is “focused on his approach to what he thinks is in the best interests of Britain,” his spokeswoman, Helen Bower, said. t

“He has been very clear that it is a matter of judgment, and people need to weigh up these issues very carefully. Britain could survive outside the EU. The question is whether it would be more successful or not.”

Mr Rutte also said that internal EU disagreement over how to respond to the refugee crisis could “tear away the very fabric of European cooperation.”