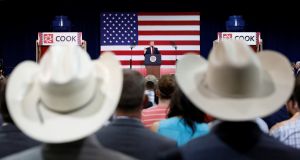 US president Donald Trump speaks about tax reform during a visit to Loren Cook Company in Springfield, Missouri, on Wednesday. Photograph: Kevin Lamarque/Reuters

For Americans who turned on their televisions this week looking for a little light relief or an update on the Texan storms, it was difficult to escape another message.

Another campaign by notonepenny.org urged people to oppose any tax cuts for the super-rich, urging voters to call Congress and make their views known.

As the focus in Washington turns to tax reform, millions of dollars are pouring in to publicity and lobbying campaigns that want to influence a policy issue that could have major ramifications for business and personal taxpayers long after President Donald Trump leaves office.

Though Congress broke for the summer recess four weeks ago, senior members of the Republican Party have been quietly working during August on a policy that many are hoping will be the signature legislative achievement of 2017 – reforming the US tax code.

The new push for reform, flagged by director of the National Economic Council Gary Cohn in an interview with the Financial Times last week, was taken up by Trump on Wednesday when he delivered a fiery speech in Springfield, Missouri.

The speech – his first on tax reform since becoming president – was short on detail, but it represented a new effort by the White House to push the tax reform agenda.

Harking back to the “America first” rhetoric of his presidential campaign, Trump described how millions of Americans in recent years “have watched prosperity slip away in the rear-view mirror”. The answer, he said, “if we want to renew our prosperity, and to restore opportunity” is to “reduce the tax burden on our companies and on our workers”.

The aim of the speech was to rally Trump’s base behind tax reform, framing the debate not just as a tax cut for the wealthy, but as a necessary booster of economic growth, one that will help increase wages and deliver economic growth for ordinary Americans.

Further speeches are expected across the country in the coming weeks as Trump tries to communicate the benefits of tax reform to his working-class voters.

For many viewers watching the Missouri speech, the irony of a billionaire property developer who has exploited tax loopholes for his own gain pledging to abolish “the loopholes and complexity that primarily benefit the wealthiest Americans and special interest groups” was painfully evident.

Further, the drive for a new tax package is being led by two doyens of Wall Street – treasury secretary Steve Mnuchin and Gary Cohn – both former Goldman Sachs executives and billionaires (Mnuchin’s wife attracted outrage on social media recently when she touted her designer labels after a government trip to Kentucky before lambasting an Oregon housewife on Instagram).

For Ireland, all eyes will be on the administration’s proposals regarding corporate tax reform

While the prominence of Cohn and Mnuchin in the tax reform discussions may hearten Wall Street, the pair have more pressing things to worry about. Reforming the US tax code is notoriously difficult, despite political will on both sides of the aisle to overhaul the American tax code.

While tax reform was one of the main priorities of Trump when he took office, progress has been slow as the White House has been consumed by various scandals, including the Russian investigation, a never-ending carousel of personnel changes and healthcare reform.

The only policy contribution to date has been a one-page document published in April outlining the principles of tax reform, which barely sketched the broad outlines of a policy and contained little detail.

Behind the scenes, however, discussion has been ongoing with senior Republicans, such as House leader Paul Ryan, in the drive to secure a deal on tax reform, particularly as the possibility of reforming Obamacare has faded.

While Mnuchin and Cohn have been leading the effort from the White House side, in reality much of the legislative work will be done by Republicans in Congress who will need to pass the deal. Both men have been meeting the other four members of the so-called “Big Six” group – Congressman Ryan, Senate majority leader Mitch McConnell and Orrin Hatch and Kevin Brady, the chairmen of the senate finance and House of Representatives ways and means committees, the two committees that will lead the charge on tax reform.

Despite the fact that Republicans control Congress and are likely to use senate rules to pass the tax reform package through that chamber, the party is divided on how best to achieve tax reform and where cuts in spending should be made to compensate for any drop in revenue.

In a measure of the difficulties facing the group in achieving consensus, in late July it was announced that they were effectively abandoning the much-touted border adjustment tax, effectively a tax on imports that was seen as a key way of generating tax revenue, following protestations from importers and politicians from states with strong manufacturing and food and beverage industries.

William Gale, of the Brooking Institute in Washington, is doubtful that the kind of ambitious rewriting of the tax system proposed by Trump can be achieved.

“Tax reform means different things to different parts of the Republican Party and its constituencies, and procedural rules in the Senate will limit options. The most likely outcome is that, instead of sweeping tax reform, the Republicans will settle for a package of tax cuts without structural change,” he said.

For Ireland, all eyes will be on the administration’s proposals regarding corporate tax reform.

Dublin is eyeing the ongoing discussions nervously. Trump again cited Ireland among other states this week as he expounded on the unfairness of the tax system.

“The United States is now behind France, behind Germany, behind Canada, Ireland, Japan, Mexico, South Korea, and many other nations,” he said, as he vowed to cut the US corporate tax rate “ideally” to 15 per cent from its current level of 35 per cent.

“Also, with these countries and almost every country, we have massive trade deficits – numbers that you would not believe. But this administration is going to fix that.”

The reference to Ireland follows a speech on August 2nd, when he claimed that US companies were leaving the country “every day” to set up in Ireland and other countries.

In reality, despite Trump’s pledge to slash the corporate tax rate to 15 per cent, a tax rate of between 20 and 25 per cent is seen as more likely.

A proposal to encourage companies to repatriate the trillions of dollars that are resting offshore is also up for discussion between the White House and Republicans on Capitol Hill, perhaps along the lines of the repatriation holiday offered by the Bush administration in 2004.

Whether either of those changes would have a material impact on the investment decisions of US companies operating abroad remains to be seen.

“I don’t think there’s any reason to expect that companies will change their investment patterns as a result of any change to corporate tax,” says Matt Gardner of the Institute on Taxation and Economic Policy, explaining that the real challenge for legislators is tackling the various loopholes that are used by companies to avoid the high US corporate tax rate.

He also queries whether a tax holiday aimed at encouraging the repatriation of profits would boost the US economy by encouraging investment and creating jobs as claimed by the administration, noting that the main beneficiaries of the 2004 tax holiday were, in fact, shareholders.

With members of Congress preparing to return to Washington next week, many predict a long and complex negotiation process that could continue until the end of the year, though the White House has signalled that further details could be unveiled this month with legislation going to committee stage in October.

Whatever the outcome, it will be watched closely in Ireland.