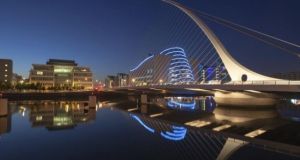 Ireland is still top for FDI value, the study says

Ireland has been named the best country in the world for attracting high-value foreign direct investments for the sixth year in a row.

“International competition for investment has never been more intense,” said Martin Shanahan, chief executive of IDA Ireland. “Ireland being named as the best country for high-value FDI for six years in a row is excellent news and will assist us greatly when making the case for Ireland in boardrooms across the world.”

According to the report, global foreign direct investment (FDI) levels increased significantly last year with the numbers of jobs created as a result rising by 10 per cent, its strongest level in a decade.

India took the top spot for attracting foreign investment, replacing the US, which had led for the past four years. Mexico was named in third spot after FDI inflows jumped by almost 25 per cent. China and Thailand round out the top five.

The latest report shows Brexit is beginning to have an impact, with the UK experiencing a decline in the level of its inward investment performance. The knock-on effect of this is that there was a 13 per cent drop in the number of related jobs created in 2016.

“Notwithstanding a general positive trend and growth in FDI in Europe, countries with fundamental structural weaknesses in their competitive position saw deteriorating performance,” the report says.

The vast majority of the growth in global FDI last year was driven by companies in the US and Germany. Firms in China and South Korea also significantly increased their foreign investment activity, while Japanese companies reduced their internationalisation efforts.

Transport equipment (and in particular cars) continues to be the leading sector for global FDI, followed by tourism, ICT, chemicals and business services.

“IDA Ireland will continue to target blue-chip companies and the next wave of high growth companies in the coming years and capitalise on Ireland’s position as one of the top destinations in the world for foreign direct investment,” said Mr Shanahan.

1 Irish company paid €1.2m a year by collapsed Blumenthal-linked Australian restaurant
2 Hugo MacNeill steps back from Goldman Sachs role
3 Should AIB compensate me for upsetting letter on arrears?
4 Legal eagles yet to land; economy to grow 3.4% this year; and CEOs on social media
5 ‘I wouldn’t be a big saver. I tend to buy now and repent at leisure!’
6 How to turn racists’ genetic arguments against them
7 Irish economy to grow by 3.4% this year, predicts EY
8 Why bosses should not be afraid of speaking out on Instagram
9 Poll on second election, concerns over Irish pension gap, and Ireland’s rich list
10 Cross border trade reached all time high of €7.4bn in 2018
Real news has value SUBSCRIBE