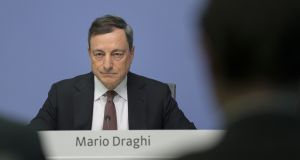 Mario Draghi: said the euro area recovery was proceeding but risks to it outlook “remain on the downside”. Photograph: Jasper Juinen/Bloomberg

European Central Bank chief Mario Draghi triggered a rebound in oil prices and global stocks after he opened the door to a further boost in March to the bank’s stimulus campaign.

Mr Draghi cited concern about the turmoil in financial markets and anxiety over China and other emerging markets as he said the bank will take stock of the situation at its next rate-setting meeting.

“As we start the new year, downside risks have increased again amid heightened uncertainty about emerging market economies’ growth prospects, volatility in financial and commodity markets and geopolitical risks,” he said.

“It will therefore be necessary to review and possibly reconsider our monetary policy stance at our next meeting in early March.”

One day after big drops in the MSCI All Country World Index brought accumulated losses past the 20 per cent barrier that signifies a bear market, the news was enough to bring the index 0.68 per cent higher.

Renewed hopes of further ECB action drove Europe’s FTSEurofirst 300 index 2.1 per cent higher, the Iseq in Dublin advanced 1.5 per cent, the euro fell to a two-week low against the dollar and oil prices gained $1 a barrel to return to $30.

“Market expectations may centre on relatively modest action, but further market woes or an even weaker inflation outlook might prompt more aggressive measures,” he said .

The ECB took no new action, leaving its main interest rate at a historically low 0.05 per cent and its deposit rate at minus 0.30 per cent.

Mr Draghi will this morning address the World Economic Forum in Davos, an event dominated by market turmoil wiping trllions of dollars from asset prices.

Although the ECB chief insisted the euro area recovery was proceeding, he recognised that risks to its outlook “remain on the downside” and said the global situation had worsened since the bank’s last meeting in December .

At Davos, however, US treasury secretary Jack Lew struck an upbeat tone on the US economy as he cited rising car sales and an improving housing market. “The United States continues to grow, and it’s still a source of confidence in the world,” he said.

“There are a lot of headwinds, and there are factors out there in the world to be focusing on, but I think it’s important to start with where are we.”

Mr Lew played down concerns about the rate of growth in the Chinese economy.

“It shouldn’t be a surprise that China’s growth rate is slowing down – that’s something that’s been under way and the question is really can they reach a sustainable, healthy growth rate.”

Nobel Prize-winning economist Joseph Stiglitz expressed similar sentiments in a panel debate with Taoiseach Enda Kenny, though he stressed that the transformation under way in China was a key issue faced by the global economy: “China over the last 15 years and in particular the last seven years, has been the engine of global economic growth, and part of that has been enormous demands for national resources . . . It should have been obvious that this wasn’t going to continue.”

1 Provisional liquidator appointed to Dublin engineering firm
2 How can I view my dead brother’s will if I’m not the executor?
3 Kerry trading profit rises 12.1% in year of mega-deal miss
4 Bank of Ireland staff in line for 2.95% pay increase
5 Bursting of Tesla bubble a case of ‘not if, but when’
6 Finance Ireland plans stock market flotation in May
7 Must you pay a price for ethical investment?
8 US reiterates opposition to Huawei equipment being used for Irish 5G
9 Flutter’s planned merger with Stars gets informal approval in Australia
10 Finance Ireland’s IPO, Huawei and Irish 5G, and pay rises at Bank of Ireland
Real news has value SUBSCRIBE