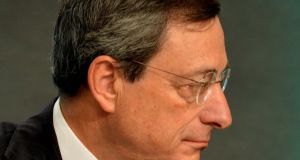 President of the European Central Bank Mario Draghi: Will be the keynote speaker at the event in Sintra, northwest of Lisbon. Photograph: David Sleator/The Irish Times

When Mario Draghi secludes himself with Europe’s top minds in central banking this week, he won’t be able to escape one question: What next?

After all but promising that he’ll ease monetary policy in June, the European Central Bank president must now manage market expectations as banks from Goldman Sachs to Société Générale speculate whether he’ll go further and deploy large-scale asset purchases in coming months.

Mr Draghi yesterday opened the first ECB Forum, a gathering of policymakers and academics to be held annually in the mountains northwest of Lisbon. What he says in three appearances over the next two days could provide clues on how he plans to overcome the stubbornly-low inflation that’s threatening the euro area’s return to economic health.

Officials have said they’re working on a package of possible measures for the June 5th policy meeting, including interest-rate cuts and liquidity injections, while holding out the prospect of quantitative easing as a more powerful option.

‘Easing package’ “An important part of the package will be the accompanying words,” said Francesco Papadia, a former director general of market operations at the ECB and now chairman of Prime Collateralized Securities in Frankfurt. “If he says that the council has given a first insta

lment of measures and will be ready to do more . . . this could give more weight to the easing package.”

Mr Draghi hosted a dinner last night and will give a keynote address this morning at the event in Sintra, Portugal, which the bank is keen to promote as a European answer to the US Federal Reserve’s annual conference in Wyoming.

The ECB may use the occasion to elaborate on what Draghi meant when he told reporters on May 8th, after leaving rates on hold, that the governing council is “dissatisfied” with the outlook for consumer prices and “comfortable” with action in June. Inflation has been below 1 per cent since October, less than half the ECB’s goal, and economies contracted in the first quarter.

So far, investors have taken him at his word. – (Bloomberg)