‘Double Irish’ tax arrangements to be targeted by OECD plans 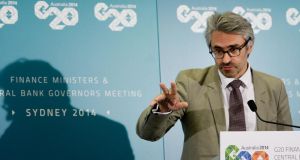 
The tax structures used by some of Ireland’s largest multinational employers are likely to be brought to an end, a leading figure from the Organisation for Economic Co-operation and Development (OECD) has said.

It is the first such direct comment from a senior figure that tax structures involving Ireland and used by companies such as Facebook, Google and Microsoft are likely to be brought to an end by the organisation’s so-called Base Erosion and Profit Shifting (Beps) project.

Pascal Saint-Amans, director of the centre for tax policy and administration at the OECD, was asked during a webcast from Paris yesterday if structures such as the so-called “double Irish”, where a large proportion of a company’s profits end up in a tax haven such as Bermuda, would be brought to an end as a result of Beps.

He said the world was changing and the OECD wanted to introduce new measures to prevent some countries taking unilateral action to address the situation.

He said he would welcome it if technology companies were making arrangements in anticipation of the system being changed. “I think that would be a smart move,” he said.


Profits sheltered
The double Irish and similar global structures, used by many technology companies with large operations here, shelter profits from tax by having the intellectual property involved legally held by tiny Irish-registered subsidiaries that are tax resident offshore.

The Irish operations with the substantial operations serving markets in Europe and further afield pay royalties and licence fees to the offshore companies, thereby avoiding the European corporation tax system because the profits end up in tax havens.

Concerns have been expressed by Chartered Accountants Ireland that another aspect of the Beps project, aimed at creating a closer alignment between a company’s sales and where it pays its tax, will adversely affect Ireland.

Smaller countries will lose out to larger economies if the proposals go ahead, according to Brian Keegan of the institute.

Asked yesterday by The Irish Times if some of the Beps proposals had an inherent bias against smaller economies, Mr Saint-Amans said the OECD was looking at bringing an end to the divorce between where the profits are located and where the real activities take place.

He said the OECD, as a result of its research, was in favour of tax competition. What the OECD member states were concerned about, he said, was not low tax but “zero tax” or situations where all the profit and all the intangibles, such as the intellectual property, ended up in jurisdictions where there was not only no tax but no business activity. Beps would “neutralise” the opportunities for locating profits in jurisdictions without locating the business activities there, he said.

The measures being examined would “favour” lower tax countries as they would no longer have to compete with zero tax jurisdictions. “Everyone should understand that,” he said.


Global response
The OECD, which represents 34 developed economies, has been asked by the G20 finance ministers to examine proposals to combat global tax base erosion.

The Paris-based organisation will present some of its proposals this September, with the remainder expected in September of next year, in time for the 2015 meeting of G20 finance ministers, and the following month’s meeting of the G20 heads of state.

1 Irish company to test vaccines on volunteers deliberately infected with Covid-19
2 Air travel never going ‘back to way it was’
3 Should I switch bank now with Ulster Bank at risk of closing?
4 Bank of Ireland sees more than 1,400 staff apply for redundancy
5 Eir takes on extra staff as ComReg chases it on complaints
6 Why working in an office beats living at work
7 ECB plots Amazon-style website to sell soured Covid loans
8 Review: Bigger not always better for laptops
9 How to bring a hotel group through a pandemic
10 Stripe wins more corporate customers, announces Salesforce deal
Real news has value SUBSCRIBE