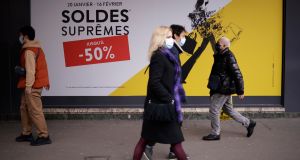 The majority of businesses surveyed reported a contraction in activity. Photograph: Yoan Volat/EPA

The sharp drop in euro zone business activity has deepened, according to a widely-watched survey of companies, in the latest evidence that tighter restrictions to contain rising coronavirus infections are dragging the bloc towards a double-dip recession.

The IHS Markit flash composite purchasing managers’ index for the euro zone dropped 1.6 points to 47.5 in January, its third consecutive month below the 50 mark, which indicates a majority of businesses reported a contraction in activity.

The near-term outlook for the euro zone economy has darkened since several countries including Germany and the Netherlands tightened lockdowns in recent weeks in response to a resurgence of the virus, leading economists to forecast a fresh economic contraction this winter. It comes after the 19-country bloc was plunged into a historic recession in the first half of 2020 when the pandemic first took hold.

The gloomy figures triggered a sell-off in European equity and debt markets; the region-wide Stoxx 600 index fell 1 per cent in Friday morning’s trading, wiping out the week’s gains, while Italian government bond prices dropped to their lowest level since November.

The pandemic’s second wave is fuelling a two-speed economic impact, however: the euro zone’s services sector is hard-hit by the fresh restrictions, with its PMI falling 1.4 points to 45 in January, but the manufacturing PMI dropped less than expected to 54.7, down from 55.2 in the previous month but still in expansionary territory.

Sentiment about future prospects “cooled slightly in the service sector” but optimism among manufacturers increased to a three-year high, IHS Markit said.

However, there were some negative signs in the manufacturing sector. “The rate of factory output growth weakened to the slowest since the recovery began,” IHS Markit said, while the recent sharp increase in container shipping costs between Asia and Europe caused the biggest jump in manufacturing input costs for almost three years.

The flash PMIs, published about 10 days before the final figures and based on about 85 per cent of typical responses, are the earliest comprehensive indicator of the economic impact of the new restrictions.

Jessica Hinds, economist at Capital Economics, said the data meant the eurozone economy would “start 2021 firmly on the back foot”, adding that the outlook for the rest of the year “hinges on the pace of the so-far slow vaccine rollout; more delays will only postpone the recovery”.

However, Christoph Weil, an economist at Commerzbank, said the survey results “confirm our view that the recession in the euro area will be much milder in the winter half-year 2020-21 than in the spring 2020”.

The European Central Bank published its quarterly survey of forecasters on Friday, finding many of them had cut their forecasts for euro zone growth this year by an average of 0.9 percentage points, to 4.4 per cent - but their average forecasts for next year rose 1.1 points to 3.7 per cent.

The slowdown was felt in both of the euro zone’s largest economies.

Phil Smith, associate director at IHS, said German manufacturers “are seemingly undeterred by the growing troubles on the supply side”, adding that “output expectations in the sector [ARE]now at a record high”.

The composite PMI for Germany - which combines services and manufacturing - dropped 1.2 points to a seven-month low of 50.8.

The index for French manufacturing was up slightly and remained in growth territory. The composite PMI score for France was down 1.5 points at 47.

The UK’s services sector recorded an even deeper decline, with its index sinking to an eight-month low after the British government tightened its lockdown in recent weeks following the discovery of a more infectious strain of coronavirus.