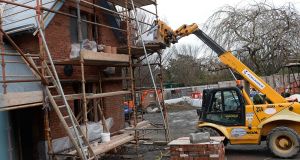 The ESRI suggests the Irish market needs about 25,000 new homes per year but only 12,500 completions are likely this year and 13,100 next year. Photograph: Cyril Byrne/The Irish Times

You don’t have to look as far as China’s slowdown or “Brexit” risk to see threats ahead to Ireland’s recovery. Danger lurks right here at home in the form of severe constraints on the housing market. The necessity for urgent action is clear. The question is already likely to be a major election issue.

The problem is the gaping lack of housing supply, which is driving rents up and prices even as new Central Bank mortgage rules curtail lending. It’s wrong to blame the Central Bank caps, which are cast to protect everyone from runaway bank credit. The Economic and Social Research Institute suggests the Irish market needs about 25,000 new homes per year but only 12,500 completions are likely this year and 13,100 in 2016. As the 25,000 target won’t be reached until 2018 at the earliest, steps to hold back bank lending are a good thing.

The ESRI assessment follows notable interventions in recent days by two public bodies. On Wednesday, National Treasury Management Agency chief Brendan McDonagh told an Oireachtas committee that developers were stalling the construction of new houses to inflate profits. Many were “not satisfied” with a €20,000 profit on a €300,000 home, he said. They would rather wait until prices rose to a point at which a €50,000 profit was possible.

This came days after a report from the National Competitiveness Council, which advises the Government on economic trends. Warning that Ireland’s international competitiveness was under threat, the body made the salient point that rapid increases in rental costs and purchase prices feed into increased wage demands and living costs. “A rising- house-price- wage-rate-cost-of-living spiral adversely impacts on quality of life for those already living here, and makes Ireland a less attractive location for potential migrants, especially high-skilled migrants who have their choice of destinations.”

The council made several recommendations. Among the most striking was its call for a “site value tax” on the unimproved value of commercial property and land zoned and serviced for development. The aim would be to provide a disincentive against the kind of land hoarding identified by Mr McDonagh.

To say the least, the history of tax measures in the property sphere is varied. But the ESRI also sees merit in fresh efforts to boost supply via taxation. Indeed, the think tank’s final quarterly commentary of the year finds the recent debate on rent certainty was “somewhat tangential” to prime difficulty with supply.

Thus the ESRI calls for serious examination of a Danish-style tax on land value which increases in line with prices and thus rises as development pressure grows. “This provides landowners with a direct financial incentive to release suitable land for development when the market demands it most,” said a paper by ESRI analysts Ciara Morley, David Duffy and Kieran McQuinn. Citing the Danish example, they said such a tax “generally results in land becoming available when most needed.”

But that’s not all. Little more than 5,500 social-housing units have been built since 2009, a period of deep crisis in the public finances. Although the Government has pledged to build 35,000 in 2015-2020, the ESRI said current trends suggest the target will not be met. An obvious way out was for the Government to resume an active policy of local-authority housing provision. “At times during the 1970s and 1980s, social housing accounted for nearly one-third of the total stock of housing built in the economy for a given year.”

There are other suggestions, among them the notion of a statutory timeline regarding compliance with planning regulations “to prevent extended delays in the commencement of developments.” While citing some evidence that government grants in Britain to subsidise stalled projects may lighten supply pressures,execution was difficult and success notoriously difficult to quantify.

For all of the extraordinary progress made in the growing Irish economy, the difficulties in the housing market are something of a running sore. This has implications for everyone, not only young people seeking a foothold in the market.

Property was at the very epicentre of the collapse in the public finances and banks, each of which are now in recovery. Finding a way through the swamp necessitates political courage to finally close off the scope for supernormal profit on housing developments.