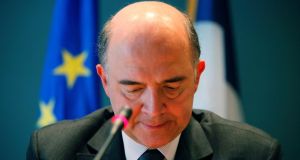 Europe’s move to give France two more years to cut its public deficit to below 3 per cent marks the end of the “austerity dogma” in Europe, French finance minister Pierre Moscovici said today.

The European Commission on Friday gave France two more years to meet its budget deficit target because of the country’s poor economic outlook within the recession-hit euro zone.

“This is decisive, it’s a turn in the history of the European project since the start of the euro,” Mr Moscovici told French radio Europe 1 in an interview. “We have witnessed the ending of a certain form of financial austerity and the end of the austerity dogma.”

President Francois Hollande had appealed for an extra year to bring France’s public deficit below 3 per cent of economic output in line with European targets, as the weak economy was pushing unemployment levels in Europe’s second-biggest economy to record levels.

The debate over austerity measures to reduce national debt levels versus policies targeting job creation and growth has fuelled speculation of souring relations between Mr Hollande and German chancellor Angela Merkel, who spoke on the phone on Saturday evening.

Mr Moscovici repeated that France would stick to its target to cut its public deficit to below 3 per cent of economic output in 2014, but he welcomed the two-year leeway in case growth is not strong enough.

“Austerity is over, but we remain serious,” he said.

Politicians in Germany, Europe’s biggest economy, which goes to the polls in just under five months, have begun to criticise French policies more openly.

Rainer Bruederle, the lead candidate for the junior coalition partner the Free Democrats, said today that France was an example of the damage that the wrong policies could do.

“In France you can see what can happen to an economy that counts on redistribution, higher taxes, shorter working times and a younger retirement age,” Mr Bruederle told a party conference.

“It results in less growth, higher sovereign debt and lower competitiveness... Europe is waiting longingly for a Mitterand moment with Francois Hollande,” he said, referring to reforms made late in the presidency of former French leader Francois Mitterand.

“If several countries - not just Spain and France, but also Portugal, Greece, Ireland, the Netherlands and Slovenia - have already won more time to meet the 3 per cent deficit target (of GDP), why not Italy?”

Italy has committed to keeping its budget deficit at 2.9 per cent of gross domestic product in 2013, just under the European Union’s 3 per cent ceiling.