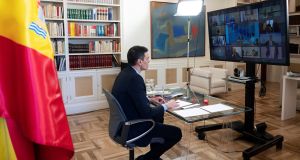 Leaders hoped the video conference would display European Union unity, to counter impressions the bloc has faltered in the face of the pandemic.

Instead, the discussion between EU leaders on Thursday night descended into bitter acrimony along dividing lines that date back to the previous economic crisis that shook the union in 2008.

This month has been one of the toughest ever for the EU. Freedom of movement – the work of decades – collapsed over a long weekend with a cascade of border closures. It has threatened the functioning of the single market too, with trucks waiting hours at checkpoints and harvests at risk of rotting in the fields because seasonal workers cannot cross borders to pick them.

The countries hardest hit by the pandemic, Italy and Spain, have demanded rapid action to demonstrate that EU solidarity truly exists.

Germany, France and Austria have donated millions of masks to Italy, and the countries that can are taking in coronavirus patients from neighbouring states.

But it’s difficult for these facts to overturn the impression of abandonment formed in the early weeks of the crisis, when France and Germany banned exports of protective medical gear, and aid from China, Russia and Cuba arrived in Italy before any EU country responded to Rome’s appeal for help.

The Rome government – which includes the euro-critical Five Star Movement – has warned that swift and dramatic action is needed to counter a surge of Italian disillusionment in the entire EU project that is building upon years of resentment over austerity and the lopsided impact of the migration crisis in the bloc’s third largest economy.

Ahead of the video conference, Italy and eight other euro zone countries – Ireland, Belgium, France, Luxembourg, Spain, Portugal, Greece, and Slovenia – appealed for the bloc to issue common debt to finance the investment needed to counter the deep economic shock caused by the pandemic.

The bloc would jointly guarantee repayment of the so-called eurobonds (or coronabonds), which supporters argue would bring down borrowing costs.

It is an idea previously floated in the aftermath of the financial crisis of 2008. Then, as now, joint debt was strongly opposed by “frugal” northern states – particularly the Netherlands, which believes cheap money would remove incentives for prudent fiscal policies in weaker economies, and faces strong public opposition to the idea of ending up on the hook for other countries’ spending.

“The joint issue of debt via eurobonds is not a solution of the structural challenges of EMU member states. Joint debt issuance can thereby undermine incentives for sensible policy at national level,” Dutch finance minister Wopke Hoekstra wrote this week.

A counter-proposal was put forward – countries could ask for loans from the European Stability Mechanism or ESM, the agency set up in 2012 to keep countries like Greece financially afloat to stem the euro zone debt crisis.

But even the initials “ESM” are politically toxic in countries that underwent financial bailouts, where the public understands that such loans come with conditions attached: the requirement to impose spending cuts and tax rises to reduce national debt.

In contrast, this so-called “conditionality” is precisely why the ESM is supported in the frugal states.

It’s a familiar old division: the same one that scuppered the agreement of a common EU budget in February, which must be agreed by the end of the year to ensure continued funding to union programmes.

The so-called “frugal four” of the Austria, Denmark, the Netherlands and Sweden – the largest net contributors to the bloc – refused to stump up any more to fill the €75 billion hole left by Britain’s departure. This blocked the hopes of countries who say increased funding is the only way to make the EU work for citizens and fulfill its geopolitical ambitions in the world.

Ultimately, neither proposal succeeded on Thursday night. Italian prime minister Giuseppe Conte announced he was rejecting draft conclusions before the video conference had even concluded. Leaders settled on a joint statement agreeing that fresh proposals should be presented within two weeks.

If, by then, solidarity is still elusive, no less than the entire EU project is at stake, Spanish prime minister Pedro Sanchez warned.

“If we do not propose now a unified, powerful and effective response to this economic crisis, not only will the impact be harder, but its effects will last longer and we will be jeopardising the entire European project,” Sanchez said.

“The same mistakes of the 2008 financial crisis, which sowed seeds of disaffection and division with the European project and caused the rise of populism, cannot be made. We must learn that lesson.”

1 Should my mam wait for house prices to drop before buying?
2 Cheers: Conor McGregor's whiskey races up the sales chart
3 Big majority uncomfortable returning to everyday activities
4 ‘I’m so lucky to be in the Caribbean – a million miles from Derry Girls’
5 Why we’re about to learn if we are really in the A-team
6 US ‘hard seltzer’ drink White Claw launches in Ireland
7 ‘I have a talent for justifying purchases’
8 Hard-hit SMEs get ‘paltry’ €11m worth of loans under State scheme
9 Dublin drops out of top 50 in ranking of best cities for start-ups
10 Chris Johns: Past is another country when it comes to our post-pandemic future
Real news has value SUBSCRIBE