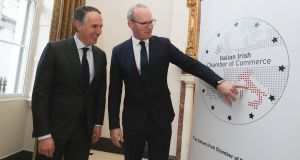 An Tánaiste, Minister for Foreign Affairs and Trade, Simon Coveney, pictured at the launch of the Italian Irish Chamber of Commerce in Dublin with Furio Pietribiasi, MD Mediolanum Asset Management

Minister for Foreign Affairs and Trade Simon Coveney has launched the inaugural Italian Irish Chamber of Commerce (IICC), reflecting the near €14 billion in bilateral trade between the two countries.

Italy is Ireland’s ninth largest export market. In 2018, Ireland generated a €2 billion trade surplus with Italy on the back of exports of medical devices, dairy products, telecommunications and transport equipment.

“Over the last five years trade between Ireland and Italy has increased and the role of organisations like the Italian Irish Chamber of Commerce cannot be underestimated in continuing to drive this progress,” Mr Coveney said.

“Ireland benefits from a positive trade surplus with Italy and while the traditional sectors associated with Italian trade such as food and beverages are always strong, the mobile telecoms and financial services sectors are growing also with companies such as Soldo and Mediolanum operating on these shores,” he said.

More than 40 businesses have already signed up to the IICC since the start of the year, including, international shipping firm d’Amico, Intesa SanPaola Bank and Mediolanum Asset Management, one of Ireland’s largest investment houses.

Chief executive of Dublin-based Mediolanum and inaugural president of the IICC, Furio Pietribiasi said: “ The launch of the IICC today is an important milestone in the future of Irish-Italian commercial and economic relations.”

“We are confident that the activities of the Chamber will strengthen the economic ties between Italy and Ireland and help businesses to pursue further commercial and investment opportunities,” he said.