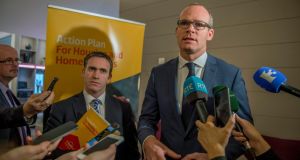 Minister for Housing Simon Coveney has defended changes to the help-to-buy plan, describing them as “worth doing” and “relatively minor”.

The changes mean applicants must take out a mortgage of at least 70 per cent of the value of a home to qualify, instead of the original figure of 80 per cent.

The Government made the changes to one of its keys budget proposals on foot of concerns raised by the Central Bank and pressure from Fianna Fáil.

Speaking on Thursday, Mr Coveney said the scheme had always been subject to a “conversation” between the Central Bank and the Department of Finance.

“The Central Bank has said that they think the threshold whereby the loan-to-value of the property should come down from 80 per cent to 70 per cent, which would ensure that nobody is overborrowing to try to avail of the grant and I think [Minister for Finance] Michael Noonan thinks that’s a sensible alteration.

“It essentially means that more people will be able to avail of it. It’s relatively minor change but it’s a change I think that’s worth doing and so he’s happy to accommodate that.”

He added that properties valued up to €600,000 remained eligible for the 5 per cent income tax rebate but that the Government was willing to look at that.

“In the publishing of the [Finance] Bill, the threshold hasn’t changed but I think there will be a willingness to listen to what Opposition spokespeople have to say and if what they’re saying makes sense and is constructive then we’ll see if the Government can accommodate that.”

The Finance Bill will be published on Thursday afternoon.