Corporation tax receipts up €6bn since 2014

Report says 80% of tax collected came from multinationals in pharma, tech and finance 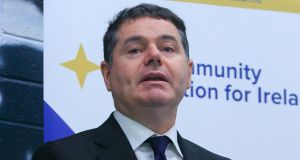 Minister for Finance Paschal Donohoe has indicated that receipts are likely to be higher again this year. Photograph: Gareth Chaney/Collins

The Government has enjoyed a near €6 billion bounce in corporation tax receipts since 2014, a technical paper published by the Department of Finance has revealed.

It said that the department had underestimated how much it would collect from the business tax by an average €1.1 billion in each of the past five years.

The report also highlighted “the concentrated nature of revenues” with 80 per cent of last year’s €10.4 billion total coming from a relatively small cohort of mainly US multinationals in the pharmaceutical, technology and finance sectors .

However, it claimed that the concentration risk may be partially offset by the fact that bigger firms had better “survival” rates.

It also suggested that it was difficult to ascertain whether the excess revenue could be classified as a “windfall” or whether it reflected “longer-term structural changes within the economy”.

The jump in receipts has been linked to the onshoring of assets here in the wake of a global clampdown on multinational tax avoidance and increased corporate profitability generally.

About 45 per cent of last year’s total came from just 10 companies, understood to include tech giants Apple, Microsoft, Dell, Google and Oracle.

Minister for Finance Paschal Donohoe had originally signalled that 2019 corporation tax receipts would be behind what was an “exceptional 2018”. However, more recently he has indicated that receipts are likely to be higher again this year.

The Government has been warned not to use the excess revenue to fund permanent spending measures.

“One of the difficulties with forecasting corporation tax receipts arises out of their lumpy nature, with 80 per cent of receipts arriving in four key months – May, June, October and November,”

“This makes forecasting more problematic at budget time as close to 50 per cent of corporation tax income is received after forecasts are prepared,” it said.

The report also noted that while payments and corporation tax liability were highly concentrated, the use of and value of capital allowances claimed as well as research and development tax credits were also highly concentrated among multinationals.

It said €49 billion of the €67 billion in plant and machinery and intangible capital allowances in 2017 could be attributed to foreign-owned multinationals.

Welcoming the work undertaken by his officials, Mr Donohoe said: “This paper acts as another reminder of the heightened growth in corporation tax receipts in recent years, some of which exceeded even departmental projections.”