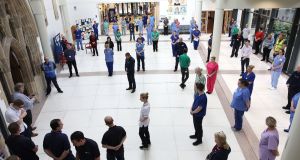 National Health Service staff at the Mater hospital in Belfast, during a minute’s silence to pay tribute to the staff and key workers who have died during the coronavirus outbreak. Photograph: PA

Irish and UK business groups have called on Dublin and Belfast to co-ordinate their response to the coronavirus outbreak amid concern that policy divergence on the island of Ireland may amplify the crisis.

In a joint letter to the Taoiseach and Northern Ireland’s First and Deputy First Minister, employers’ group Ibec and its UK equivalent, the Confederation of British Industry (CBI), said greater co-operation and co-ordination across the UK and Ireland, and in particular on the island of Ireland, provided the best chance of protecting public health and restoring people’s prosperity.

The business lobbies said it was in everyone’s interests to have experts on both sides of the island of Ireland “regularly communicating on their respective plans for economic revival and recovery, including for all-island business and cross-Border employment.”

Ibec and CBI highlighted integrated supply chains for medicines and pharmaceuticals and the region’s integrated agri-food market as potential areas of risk.

“To support these supply chains and ensure that the measures taken in the recovery phase, help to sustain the wide range of business activity between the two jurisdictions we will need the highest level of co-operation, co-ordination and joined-up thinking,” their letter stated.

The groups also noted that: “A return to daily movement of workers and goods between Northern Ireland and Ireland (and across the two islands) will depend on the easing of current restrictions and alignment with medical advice.”

At the outset of the crisis the Republic shut schools, universities and childcare facilities in advance of the North and there has been a divergence in policy on restrictions, testing and isolation.

However the Republic’s chief medical officer, Dr Tony Holohan, has dismissed claims that a spike in Covid-19 cases in counties near the Border is due to a “spillover” of infection from Northern Ireland.