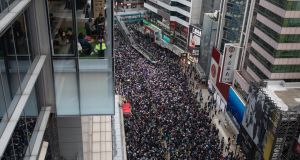 Continuing protests in Hong Kong have been among several threats to the Chinese economy. Photograph: Bloomberg

China’s economic growth slowed to its lowest levels in almost three decades last year, but the overriding sentiment in the corridors of power of Beijing was relief. Staving off a financial crisis while grappling with thorny issues at home, in Hong Kong and abroad was no mean feat.

The Chinese economy is expected to register about a 6 per cent growth rate for 2019 – the lowest since 1992 – and, with estimates coming in at 5.8 per cent for 2020, the trajectory is clear, analysts say.

“The . . . economy is moving in one direction. It is progressively getting slower and slower and that is going to be the case indefinitely,” said Dinny McMahon, a fellow at MacroPolo, a Paulson Institute think tank.

China’s economy has doubled in the past decade and, with nominal GDP at $14.14 trillion (€12.75 trillion), was second in size last year only to the United States, which stood at $20.49 trillion (€18.47 trillion). China ranked first by purchasing power parity – adjusted for the differences in the cost of living – but only listed 73rd when considered on a per-capita basis.

Recent policies have been geared more towards stability than the previously preferred stimulus-driven chase for double-digit growth. Looking back on 2019, Chinese president Xi Jinping “can pat himself on the back for avoiding a financial crisis, a collapse of the banks, or a huge meltdown in the economy”, said Andrew Collier, managing director of Orient Capital Research. “These have been consistent possibilities over the past five years.”

The domestic economic trends of the past year have been characterised by a continued focus on cleaning up the financial system, a willingness to accept a slower pace of growth, and an effort to change fundamentally the way the Chinese economy grows.

The government is moving “away from something that has been driven by investment in infrastructure and housing and more towards changing the industrial make-up of the Chinese economy and force-marching it up the value-added chain so it is a more technologically advanced economy”, McMahon said. “One that is capable of generating moderately fast growth but without the same levels of debt that has been necessary to generate growth up to this point.”

Over the past four years, officials have been pushing the banks to dispose of their non-performing loans (NPLs), efforts that further intensified in 2019. While, officially, the financial system has a NPL ratio of 1.8 per cent, it is widely believed to be much higher, with some international observers estimating it to be in the range of 10 to 15 per cent.

In the NPL crackdown, shadow banking – or capital that is distributed outside the formal banking system – and wholesale interbank lending have been brought largely to heel and are no longer as big a threat to the system as they used to be, said McMahon, who wrote a book on the topic entitled China’s Great Wall of Debt.

The Chinese government has given banks new tools to help raise capital, particularly corporate bonds, so “there has been this real push to raise capital for the banks so that they are in a better position to continue disposing of their NPLs at an accelerated level”, he said.

Officials have been highlighting their “deleveraging campaign” in recent years, but what that means on the ground is open to interpretation. The national debt figure is still estimated to be around 280 per cent of GDP and continues to grow each year above nominal GDP, so the much-touted “deleveraging campaign never really happened”, Collier said.

“However, the de-risking of the system was really quite serious. They really cracked down on the smaller, riskier banks. They shut off channels for inter-bank lending,” he said, “so there has been a real attempt by the government to shift the burden of financing the economy to the private sector, primarily through the bond market but also through some private lending.”

Even with all the recent clean-up efforts, some major cracks appeared in the banking world this year that sent shivers through the system. Four provincial banks hit troubled waters, including Baoshang from Inner Mongolia, and they all needed, and got, varying degrees of state support to keep them afloat.

The system is now caught between conflicting desires to reduce risk but also to ensure there is enough liquidity at local levels. The tighter policies have led to a credit crisis for many small banks, SMEs, property developers and local governments.

Head of a pin

The government “is dancing on the head of a pin” trying to urge the now risk-averse banks to channel much-needed funds into these areas, said Collier, author of the recent book Shadow Banking and the Rise of Capitalism in China.

To help ensure sufficient liquidity, the Chinese central bank expanded the types of collateral it was willing to extend for small banks in distress, particularly those that might be overexposed to the interbank lending market.

Local governments, with a political mandate to generate growth, are facing the strain, partly because their income was hit when policies switched from bank stimulus to tax cuts. Land sales are also starting to slow across the country and, while local governments now have quotas of bond they can issue, it is often insufficient, given their debt and interest payment burdens.

For decades, land sales reportedly accounted for 30-40 per cent of annual revenues for many local governments. But having already sold off many of their prime land assets, towns and cities are seeing dwindling returns from that finite resource.

The property market is also sluggish, and research last year showed that one in five apartments in Chinese cities – about 65 million units – were unoccupied.

The on-the-book debts for local government stands at about 21 trillion yuan (€2.7 trillion), but credit rating agencies estimate there could still be anything up to another 45 trillion yuan of “hidden debt” held off-budget and off balance sheets. Nearly 30 state-linked firms defaulted last year, and Beijing was forced to bring forward a 2020 special purpose bond allowance after local governments exhausted this year’s allocation limit by September.

There will be relief in Beijing that a breakthrough in the 17-month trade war with the US is finally in sight, but the dispute’s direct impact on the economy has been relatively limited over the year. This is partly because, as François Godement from the Institut Montaigne in Paris points out, direct trade flows between China and the US, “as impressive as they seem, are minuscule relative to GDP: 1 per cent of US GDP for American exports to China, 3.6 per cent of China’s GDP for exports to the United States (it was 7 per cent a decade ago).”

The dispute may well have been costlier in indirect ways, such as in denting consumer and investor confidence.

In the manufacturing sector, many players were already looking beyond China as it is no longer the low-cost manufacturing centre it once was, and adding trade uncertainties to the mix has prompted an increasing number of companies to assess supply chain alternatives in southeast Asia, India and elsewhere.

Hong Kong’s future also remains very uncertain, and six months of often violent unrest in the city has led to sectors, such as high-end retail, restaurants, hotels and aviation seeing revenues plummet in recent months. The financial hub’s economy is expected to have contracted by 1.3 per cent for 2019, with declines continuing into this year as the political tension show no sign of abating.

On the stock exchange front, the Hang Seng managed to weather the storm, however, buoyed by Budweiser’s Asia Pacific IPO and Alibaba’s secondary listing. Despite the local turbulence, it led the global rankings with $37.1 billion raised over the course of the year, including secondary listings.

Internationally, the world has seen an increasingly assertive China on the global business stage, illustrated by its promotion of Huawei Technologies and ZTE in 5G rollouts, and its urging of countries to sign up to its Belt and Road initiative, an infrastructure-based development strategy that spans 152 countries worldwide.

Increasingly though, Beijing found this year it was meeting international pushback.

The tech firms have been hit with allegations of IP theft and espionage, as well as criticism for military connections and unfair state subsidies. And on the Belt and Road initiative, some countries have accused China of engaging in neocolonialism and debt-trap diplomacy.

“His aggressive push to put China at the centre of global economic competition through supporting tech firms, and through programmes like the Belt and Road has backfired because many countries in Europe, US and elsewhere are now thinking twice about how they are now going to compete with China,” Collier said.

“So, I think he over-reached. And he is going to suffer the consequences for that for a number of years.”

Among local business people, factors such as Beijing’s increasingly authoritarian stance at home, the debt situation and international trade wrangling have combined to rattle confidence levels, according to Wendy Zhang, an investor from Jiangsu province.

“When we talk with our friends, some say there is a new cold war coming with America. Others say the way our government is behaving means there is a second cultural revolution coming. And the debt issue, that makes people worry a lot,” she said.

“It all makes people very nervous. No one wants to make big investments or take big risks now. And if they can get their money out of China, they do that.”