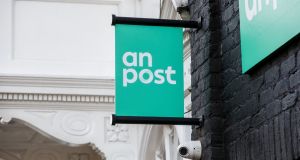 An Post is one of the companies overseen by State agency NewEra on behalf of the Government.

State companies generated almost €1.4 billion in operating profit last year and paid €261 million in dividends to the exchequer, according to data from NewERA, the agency that oversees these entities for the Government.

This compared with combined operating profit of €1.34 million and dividends of €332 million respectively in 2017/2018.

These companies, which employ 39,603 people between them, generated a return on investment capital of 5.6 per cent in 2018 and have delivered €1.77 billion in dividends to the exchequer over the past five years.

Combined turnover for the portfolio of companies totalled €11.3 billion last year, up €513 million on the prior year. Their net debt stood at just under €7 billion, up €119 million on the previous reporting period, while combined pension liabilities reduced by €333 million to €1.4 billion.

The report also notes that Irish Water (at 73 per cent) and CIÉ (at 40 per cent) are in receipt of State funding. This accounts for about 11 per cent of the combined turnover of the portfolio of companies.

Exceptional costs of €257million were incurred in 2018/2019, with the main elements being asset impairment charges of €140 million for ESB, and €91 million incurred by Bord na Móna in the context of its new decarbonisation strategy. These were partly offset by net exceptional income for Coillte of €86 million arising from the disposal of a number of wind farms.

Other steps include reducing emissions in the transport sector via commitments to convert transport fleets to electric vehicles.

“Climate action will remain a critical area of focus for the boards of all of the companies and for the State, as shareholder, as Ireland continues its transition to a low-carbon economy,” said NewERA director Andrew O’Flanagan.

The report also shows State companies are moving away from their reliance on the UK, following concerns last year over the number of organisations that still derive a significant portion of their revenue from Britain.

Just 11 per cent of combined revenue came from the UK last year with 86 per cent being generated in Ireland.

Forestry group Coillte is something of an outlier with 58 per cent of its trade last year being with the UK, an increase on the previous year.