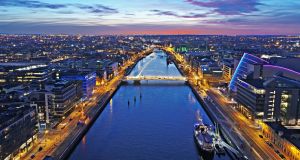 Special tax relief scheme: Department of Business, Enterprise and Innovation suggested the amount of tax being lost through the scheme needed to be ‘seen in context’. Photograph: iStock

The major spike in Ireland’s corporation tax revenue has been driven in part by a special tax relief scheme available to senior employees of multinational firms, according to a Government department.

In a submission defending its retention, the Department of Business, Enterprise and Innovation suggested the amount of tax being lost through the scheme needed to be “seen in context”.

It said that a loss to the public purse of €18.1 million in tax relief to executives under the special assignee relief programme (Sarp) had to be looked at on the basis that if the scheme did not exist, those employees would probably not be in Ireland.

In a detailed submission to the Department of Finance, it argued strongly that nothing be done “to weaken in any way” the programme.

It believed it was a key driver in bringing critically important staff to Ireland, especially where changes to international tax were on the horizon.

The submission – obtained under Freedom of Information (FoI) legislation – said Ireland was “competing for mobile talent” and that this competition was “intense”.

It was written in response to Department of Finance plans for a review of the Sarp scheme after a significant rise in its use, particularly by extremely high earners.

This led to the reintroduction of a cap of €1 million in earnings on the scheme after it emerged that four people, each earning more than €3 million per annum, were availing of it.

The department’s submission on Sarp had previously been refused under FoI.

“Our top marginal rate [of tax] applies from a very low level by international standards,” the department argued in its submission.

It said Ireland’s high marginal tax rate was further undermined by a range of tax benefits for relocating workers in EU countries including France, Holland, Denmark, Sweden, and Spain.

“For example, we are the only EU nation to restrict our scheme to assignees who have previously been employed by the employer or a related company.”

It also noted that the only other country with a maximum salary cap in place was Spain, which was primarily because there was a perception that highly-paid soccer players in La Liga were the “main beneficiaries of the lack of a cap”.

The department said there had been a massive influx of intellectual property (IP) into Ireland in 2015, which they linked to increased uptake of the Sarp scheme.

“The increase in intellectual property in 2015 coincided with a dramatic increase in corporation tax receipts between 2014 and 2015 from €4.6 billion to €6.9 billion, which has further increased each year since.”

These companies were mainly in IT, pharmaceutical and financial services and the department said it was likely “the vast majority of [Sarp] claimants are employed in these companies”.

“Even disregarding the additional employment generated and the knock-on spending economy wide, the 793 Sarp recipients alone contributed €42.33 million to the exchequer. Money which may not have been payable to the exchequer in the absence of the scheme,” the submission said.

In a statement, a spokesman for the Department of Business said: “Recipients of Sarp tend to be highly mobile, therefore it is unclear what proportion of [them], if any, might remain in the jurisdiction if the measure was withdrawn.

“Such a withdrawal would inevitably have implications for the numbers of Sarp-related jobs that would be created in the future and, by extension, the tax revenues that would be associated with those jobs.”