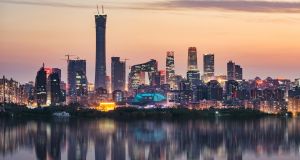 Senior officials from the central bank, the securities regulatory body, the supreme court and other departments discussed court-mediated dispute resolution concerning bond defaults at a symposium in Beijing on Tuesday, according to a report by the state-run Financial News.

China’s onshore bond defaults have exceeded 130 billion yuan (€16.7 billion) so far this year, surpassing the previous annual high of 122 billion yuan reached in 2018, according to data complied by Bloomberg. The wave of missed repayments has raised concerns over refinancing risks and the government’s ability to keep financial markets stable amid slowing economic growth.

While bond defaults have become more frequent, the tackling of repayment failures has remained “inefficient,” Zou Lan, a senior official in charge of financial markets at the People’s Bank of China, said at the gathering. Slow handling of debt delinquencies, which sometimes could drag on for years, has caused issuance difficulties in the primary market, with investors shunning notes sold by privately-owned companies, he said.

“The efficiency of the handling of bond defaults is relatively low and its results need to be improved,” Mr Zou said.

Liu Guoqiang, a deputy central bank governor, said different bondholders must be treated on an equal footing during the process of settling default disputes. He urged to take measures to restore investor confidence to allow the bond market to better serve the economy.

Under-the-table repayment arrangements are not uncommon in the world’s second largest bond market after companies failed to honour their debt obligation. Opaque practices include prioritising compensation for retail investors over institutional creditors or repayment of offshore debt over onshore notes. Another trick concerning analysts is when a debtor misses payment, it tends to seek to negotiate payment extension with creditors via private discussion in lieu of resolving it publicly through the clearing house.

China has started to develop a market-based system for bond extension and trading of defaulted debts, as part of efforts to build a “multi-layer mechanism” to diversify approaches of handling repayment failures, Mr Liu said.

1 Google completes purchase of Treasury Building for €120m
2 Garda mobile contract win causes concern over Eir’s use of Huawei kit
3 Knock gets visit from world’s largest passenger plane
4 A maverick taking on the Irish whiskey establishment
5 Appeals board grants planning for 354 Greystones homes
6 Varadkar resigns amid warning impasse will hit the economy
7 Billionaire Zara founder and German funds vie for prime Dublin offices
8 How can I view my dead brother’s will if I’m not the executor?
9 Nineteen staff made redundant by Nama share €1m
10 Barclays scraps system monitoring how long staff spent at desks
Real news has value SUBSCRIBE